Books of the Sea from Ten Pound Island Book Co. 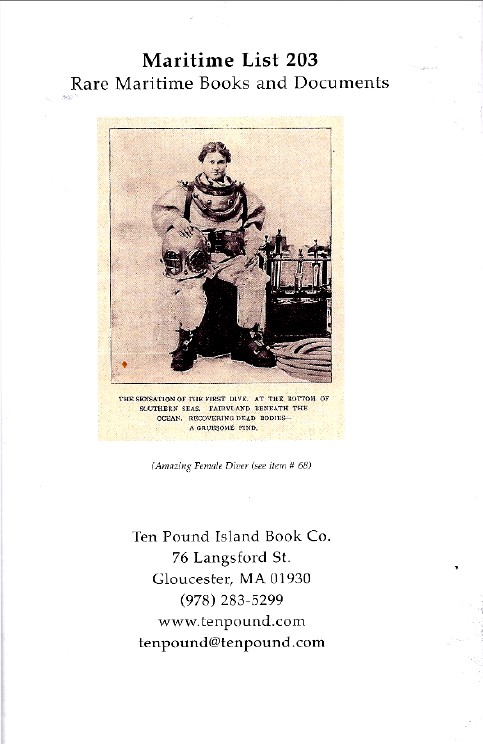 Books of the Sea from Ten Pound Island Book Co.

The Ten Pound Island Book Company has issued their Maritime List 203. It offers 75 seaworthy books and ephemeral items. Located in Gloucester, Massachusetts, it is only natural that Ten Pound Island Book Co. sell either nautical books or fish, and since it uses "book" in its name, the former seems more logical. This collection includes tales of shipwreck, crime at sea, naval encounters, piracy, yachting and the America's Cup, shipbuilding, deep sea diving, exploration, and more. For those who thrive on the other 71% of the Earth's surface, this catalogue has a selection of fascinating material. Books ahoy!

The picture you see on the cover of this catalogue is that of Frances Namon Sorcho, deep sea diver/showman. Born Frances Charlton, she married Louis Sorcho, a noted diver/showman himself in the 1890s. Where the "Namon" came from is unclear. Perhaps it was a corruption of "Nemo." Mrs. Sorcho took up her husband's profession of underwater diving plus entertaining audiences. Louis Sorcho made a name for himself performing in New York. He claimed to have located over 100 bodies from the sinking of the Maine, the event that touched off the Spanish-American War. Frances learned from her husband, and at the time was labeled the only woman deep sea diver in the world. That could be true as diving was a dangerous occupation at the time. There were no air tanks, just air hoses running to the surface, operated by hand pumps. The suits they wore were bulky and heavy. Item 68 is a pamphlet entitled Life and Adventures of Frances Namon Sorcho, the Only Lady Deep Sea Diver in the World. It was published by the "Captain Louis Sorcho Deep Sea Diving Co." The piece is undated, but it would have come from the late 1890s or, possibly, early 1900s. An 1899 article in the New York Herald finds Mrs. Sorcho performing in a water tank at the Electrical Exhibition in that city, displaying that recent invention, the electric light, in a searchlight she carried. We don't know what became of Mrs. Sorcho. Her husband continued in the business and later remarried, but we have not been able to follow Frances Namon much beyond the turn of the century. Priced at $2,000.

Item 43 is a manuscript log from 1805-06 of the ship Hantonia, kept by Ichabod Rollins. There are about 47 pages of entries, including an unusual and undoubtedly upsetting incident. The ship was at one point overtaken by pirates. On December 6, 1805, the pirates captured the ship, locked up the crew, stole everything they could pry loose, and feasted on the ship's food and drink. Notes Rollins, the pirates were "behaving in a shocking manner breaking & tearing & taking every thing they could lay their hands on." They also attempted to make themselves look like Spanish pirates, but Rollins was convinced they were French. He writes, "The pirate captain said his vessel was call'd the Queen of Spain he had Spanish colours sett but they were all French men on board of her." $5,500.