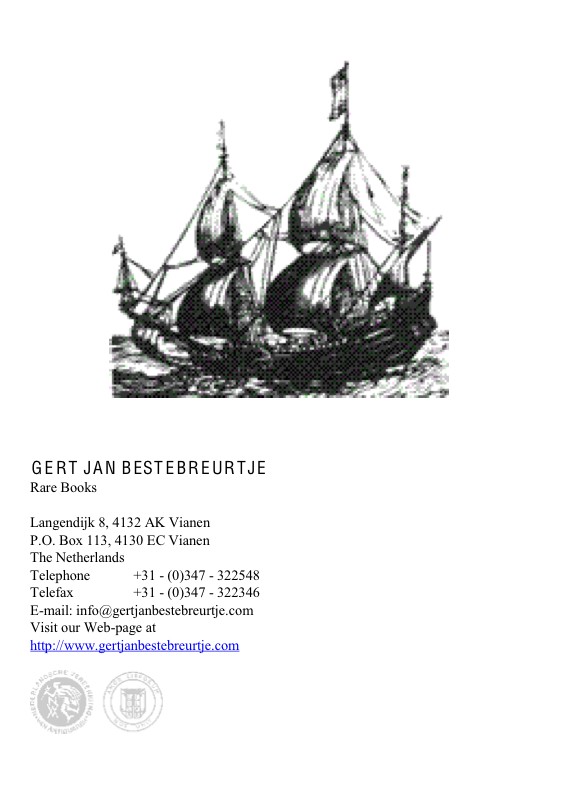 Gert Jan Bestebreurtje Rare Books has issued a catalogue of The Dutch East India Company (VOC). The VOC (those are initials in Dutch for Dutch East India Company) operated from the 17th to the 19th century. At one time, it was one of the largest colonial powers in the world, even though it wasn't a country. Its largest "possession" was the vast archipelago that forms today's Indonesia. Though at one time immensely profitable, in time it broke down, and its possessions became regular colonies of the Netherlands. This latest catalogue from Bestebreurtje Rare Books is focused on the VOC and its times. The books are almost all inexpensive, with information more the watchword than high-end collecting. The primary language of the items offered is Dutch, but English runs a very respectable second, with a few titles in French and other tongues as well.

The Dutch and the East India Company are primarily associated with today's Indonesia, their major colony, but we will look at some items that relate to their involvement with other lands in the East. Item 98 is Formosa under the Dutch described from contemporary records with explanatory notes and a bibliography of the island, by William Campbell. Originally published in London in 1903, this is a Taipei reprint from 1967. Formosa (so named earlier by the Portuguese, which translates to "beautiful island") is the island today known as Taiwan. The Dutch settled the southern part of the island in 1624, needing a base from which to trade with China. At the time, they had to compete with the Spanish and Portuguese for access to China. However, the Dutch and the VOC were able to set up trade in agriculture with the island as well. Control of Taiwan was never easy for the Dutch. First they had to battle aboriginal natives into submission, then secure the northern part of the island from Spain. Those goals accomplished, by mid century they had to battle immigrants from China, who chafed under taxes and regulations imposed by the Dutch. Finally, they had to endure attacks from China related to power struggles taking place there. By the 1660s, the Dutch had had enough of Taiwan and abandoned the island. Priced at €65 (euros, or about $93 in U.S. dollars).

At the time the Dutch and the VOC were expelling the Spanish from Taiwan, they embarked on the same mission with Spain's ally, the Portuguese, on the Malay Peninsula. The Portuguese had set up shop over a hundred years earlier in the city of Malaca. The area never became of critical importance to the Dutch. It was more a matter of diminishing the influence of Spain and Portugal in the area. Nonetheless, they remained in part of modern-day Malaysia for almost two centuries. Meanwhile, their seat of power in the area quickly settled in Batavia, today's Jakarta, Indonesia. Finally, as a result of an 1825 treaty with Britain that recognized the Netherlands' rights to their East Indies (Indonesia), the Dutch permanently left Malaysia. Item 611 recounts some of that history: History of the Dutch in Malaysia. In commemoration of Malaysia's 50 years as an independent nation and over four centuries of friendship and diplomatic ties between Malaysia and the Netherlands, by Dennis de Witt. Published in 2007. €35 (US $50).

Items 32 and 33 are volumes 1 and 2 of Dutch Sources on South Asia c. 1600-1825, by Lennart Bes. These books cover a couple of centuries of contacts between the Netherlands and the Indian subcontinent and Sri Lanka. Volume 1 (2001) contains a bibliography and guide to all related material in the Dutch National Archives in the Hague. Item 32. €30 (US $43). Volume 2 (2007) contains the same for material located in the Netherlands outside of the National Archives. Item 33. €40 (US $57).

Here is an account of a shipwreck that combined natural disaster with unnatural cruelty. Item 422 is De schipbreuk van de Batavia, 1629, by Francisco Pelsaert, commander of the not-so good ship Batavia, on its maiden and only voyage. Pelsaert had been a merchant working for the VOC when his ship was sent to the East Indies with a load of coins, jewels, and various staples intended for trade. Unbeknownst to the commander, a couple of officers under him began conspiring to mutiny along the way. They hoped to use the riches to set themselves up on some exotic island or other, out of reach of Dutch authorities. After leaving Cape Town, they deliberately steered the ship off course. However, before the mutiny was physically carried out, the boat wrecked on a reef along some islands off the west coast of Australia. There was little food and no water, so Pelsaert and a few others headed for Australia to seek water. Not succeeding, they decided to make a run for help in Batavia, a month away, in their longboat. Meanwhile, Jeronimus Cornelisz, a leader of the would-be mutiny, took charge of the survivors. Cornelisz initiated a reign of terror that made the French Revolution seem tame. In order to preserve supplies for the conspirators, he had his men gradually begin killing off the others. The process seems to have evolved from practical to fun for the brutal mutineers. In all, over 100, including women and children, were killed. In the end, Cornelisz and his cohorts would get theirs when Pelsaert and the rescuers arrived, Cornelisz being hung on the spot after his hands were chopped off. Unfortunately, Pelsaert was partly blamed for doing a poor job of running the ship, did not receive an expected promotion, and died just a year later. This book is a much later (2002) printing of his journal. €30 (US $43).