Voyages And More From The Antiquariaat Forum 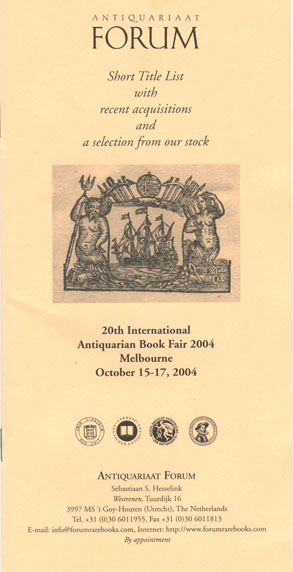 Voyages And More From The Antiquariaat Forum

This printing from the Antiquariaat Forum isn't quite a catalogue. Perhaps its title describes it best: "Short Title List with recent acquisitions and a selection from our stock." This is a piece prepared by this Netherlands bookseller for the 20th International Antiquarian Book Fair held in Melbourne, Australia, in October. There is much material on voyages, and certainly a share of them visited Australia. However, while there's an Australian tilt, there are many items of interest to those whose collections focus on another hemisphere, or the other side of the equator.

Charles Lucien was not the most famous member of the Bonaparte family, but he was better known among the birding community than Uncle Napoleon. Bonaparte produced a supplement to Alexander Wilson's "American Ornithology" when the latter, known as the Father of American Ornithology, died in 1813. Wilson's and Bonaparte's works would be supplanted as the most famous books of American ornithology a few years later by the one produced by John James Audubon. In fact, Bonaparte was one of those who encouraged young Audubon in his career. Item 6 is a collection of seven other works, in French, produced by this other Bonaparte. Priced at EU4,950 (those are Euros. American equivalent is $6,316).

Sticking to the Napoleonic theme, item 40 is Voyage de decouvertes aux Terres Australes by Peron and De Freycinet. This is the second edition of a French expedition to the south coast of Australia under the command of Baudin. One of their major tasks was to find the strait which divides the Australian continent into two halves. Naturally, they did not succeed in finding it. EU35,000 (US $44,657).

Here's the book Napoleon should have read. It is Travels in Kamtschatka, during the years 1787 and 1788 by Jean Baptiste de Lesseps. This is the first English translation from 1790 of a difficult journey from Kamtschatka through Siberia and on to Paris. Perhaps if Napoleon better understood the dangers of the Russian continent he would have made wiser choices. Item 33. EU2,950 (US $3,764).