Music and Dance from J&J Lubrano 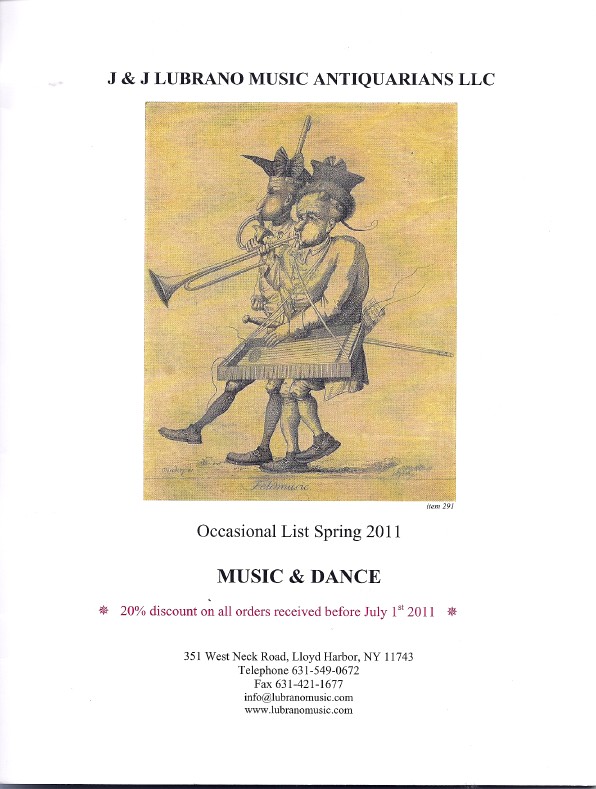 Music and Dance from J&J Lubrano

J&J Lubrano Music Antiquarians recently released a catalogue titled Music & Dance. This is mostly a catalogue of music, but with a sizeable section on dance material as well. This is an extensive catalogue - over 550 items - and not quite like the typical Lubrano catalogue we have seen. Those catalogues tend to be more concentrated in musical notation of classic works. This catalogue includes much other material, such as numerous personal letters from musicians who wrote or performed during the past two centuries.

The music is primarily what our parents referred to as "serious" music - classical, symphonic or opera. A few others sneak in, such as a Gilbert and Sullivan, or popular songs of the day, but that is a minority. Unlike previous Lubrano catalogues I have seen, this one is not mostly limited to the "name" composers such as Mozart or Beethoven. The names everyone knows will be found, but there is a great deal of material from writers and performers of a century or two ago who will be familiar to the knowledgeable in the field, but not the ordinary layman. This is a catalogue for serious collectors of serious music. Here are a few of these items.

Item 80 is a history of what is certainly classic, if not always classical music:  A General History of Music, From the Earliest of Times to the Present… While it goes way back, it includes essays on the lives and works of composers who were the most popular at the time this book was published - 1819. Among those are the likes of Mozart, Handel and Haydn. Thomas Busby's thorough work was published in two volumes. Priced at $300.

Speaking of George Handel, item 165 is a more recent facsimile of his best-known work, one of the most popular musical compositions ever written. In 1945, London's Chiswick Press published a facsimile of Selections from the Original Manuscript of the Messiah. Messiah is now two and one-half centuries old, but there are few musical compositions performed as often as it is to this day. $85.

Item 295 is a letter from Wilma Neruda to Lady Benedict, wife of noted 19th century British composer and conductor Sir Julius Benedict. Neruda, who lived from 1839-1911, was a notable violinist of the time. That was an unusual accomplishment, as few women became violinists in that era. In her letter, Neruda agrees to perform several works in concert. $150.

Here is a collection of perhaps not-so serious music from the 19th century:  Father Kemp's Old Folks Concert Tunes. These songs were "oldies" already a century and a half ago. Robert "Father" Kemp organized a troupe of singers around 1855, and they traveled around the world singing old American songs. They sang patriotic and religious tunes, and dressed in period clothing to play even more on people's nostalgia for the good old days of the turn of the 19th century, a relief to those old folks dealing with the modern technology and fast-paced life of the 1850s. Item 12. $65.

G.P.R. (George Payne Rainsford) James was one of the more prolific writers of the 19th century, though you probably don't know him. While he wrote some serious works, he poured out romances in great quantity, which made for a reputation as a lightweight, though popular writer of his day. Item 489 is one of his works with a musical connection:  The Fight of the Fiddlers:  A Serio-Comic Verity… Published in 1849, the book would probably be totally forgettable but for its illustrator, H. K. (Hablot Knight) Browne. If Hablot K. Browne is not immediately recognizable, the pen, or brush name of the noted illustrator is - "Phiz." "Phiz" is best known as the illustrator of many of Charles Dickens' books. His collectors will be interested in this obscurity. $250.

Item 261 is a scrapbook of a tour of Germany and Switzerland in 1927 by the National Orchestra of Mexico. It includes around 25 photographs of leader Ernesto Mangas and other musicians from the tour, along with letters and newspaper clippings. Mangas was also a composer, though you probably don't know even his most notable piece, Mi linda María Teresa. $450.