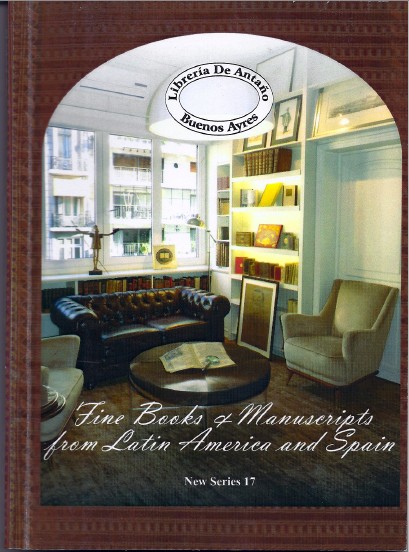 Libreria de Anatano of Buenos Aires recently issued a catalogue of Fine Books and Manuscripts from Latin America and Spain. Among the types of books most frequently found herein are very early South and Central American imprints, usually of a religious nature, antiquarian Spanish books often connected to America, 19th century works related to growing unrest and revolution in the American colonies, and 20th century Latin American literature. For those whose collections begin on the south side of the U.S. border, Libreria de Antano provides a major resource. Here are some samples of what is available.

Item 4 is sort of a reverse of firsts. Rather than the first book published in Mexico, it is the first book by a Mexican-born writer published in Europe. The author was Diego Valades, a Franciscan missionary who lived in New Spain during the 16th century. The Spanish who came to Latin America essentially did one of two things - conquer and subdue the natives, or convert them to Christianity. Valades was a representative of the latter, kinder group, even if his father arrived with the conquistador Cortes. His mother was a local Indian woman. The younger Valades was noted as a humanitarian. His book is entitled Rhetorica Christiana… and describes his work evangelizing the Indians, along with his construction of an alphabet for the native language. The book was published in 1579. Priced at $19,500.

There was a limit to how much sympathy for the Indians was acceptable, and Jose Baquijano y Carrillo went a bit over the line. Baquijano was an economist, jurist, and professor in late 18th century Peru. In 1781, he published this book:  Elogio del excelentisimo senor don Agustin de Jauregui… It was a greeting to the new Peruvian viceroy, Agustin de Jauregui.  However, it was also a condemnation of the viceregal institution. Baquijano was influenced by the encyclopedists and other liberal thinkers of late 18th century Europe, along with the great early Latin humanist Bartolome de las Casas. He called for reforms of the viceregal system and the treatment of Indians with dignity and respect. In return, the Spanish King ordered copies of his book confiscated and burned. While Baquijano, who died in 1817, was not part of the independence movement, he is regarded as one of its precursors, as he argued for local autonomy along with respect for the natives of Peru. Item 48. $7,750.

Item 10 is a most interesting item related to Florida. It is a printing of a lawsuit from 1630 by descendants of Pedro Menendez de Aviles for expenditures personally made in establishing the first Spanish colony in Florida. His colony, now St. Augustine, is the oldest permanently inhabited city in North America founded by Europeans. Menendez wished to return to America after an earlier mission in which the ship carrying his son was lost. He hoped to find his son. The Spanish King finally acquiesced, but on the condition he set up a colony in Florida and drive out any Protestants. Menendez was also left with responsibility for funding many of the mission's expenses from his own pocket. He did his job well, setting up a colony at St. Augustine and brutally wiping out the French Huguenots who had settled at Fort Caroline (today's Jacksonville). The St. Augustine colony was established in 1565, and Menendez died in 1574, so this lawsuit by his descendants came many years later. They were awarded 15,000 ducados, apparently a sizeable sum. $8,750.