More from the Library of H.P. Kraus<br>At Oak Knoll Books 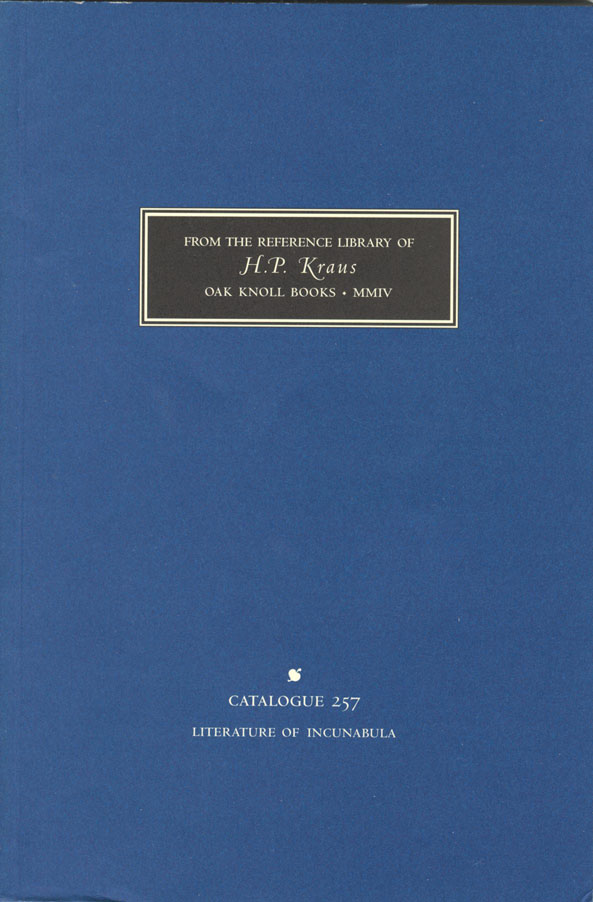 More from the Library of H.P. Kraus<br>At Oak Knoll Books

Oak Knoll Books has just issued the second part of its catalogue "From the Reference Library of H.P. Kraus." H.P. Kraus was the legendary New York bookseller who developed one of the largest private reference libraries ever assembled, many times the stock of the books he actually had for sale. Mr. Kraus died in 1988, and after his wife passed away last year, his inventory and reference material was put up for sale at auction. Oak Knoll, being a specialist in reference and bibliography, bought a large part of that material, which it is now offering for sale.

Not all of the items in this catalogue came from the H.P. Kraus library, as Oak Knoll has augmented the collection with related titles. However, books from the Kraus library do include a loose bookplate indicating the provenance. There are many works in French and German as well as English as Kraus always had an orientation to his native Europe. As the collection offered is quite extensive, with almost a thousand titles in this second part of the catalogue alone, we will limit our examples to one very targeted subject alone. What better topic to focus on than Johannes Gutenberg, inventor of the printing press and the world's first publisher?

The first book Gutenberg printed was hardly new, its age already being measured in millennia when it rolled off his press in 1454 or 1455. We use the terms "rolled off" loosely as it took several years to complete the printing and production of 180 bibles, but even that was about 180 times the speed of the average scribe. It is believed that around 50 of those copies survive complete or substantially complete.

When George Hibbert, a successful British merchant retired to live in the country in 1829, he put his huge collection up for sale at auction. There were 8,726 items in total, including a paper copy of the Gutenberg Bible. The auction lasted 42 days, and when completed, brought in a total of around £23,000. Item 903 is the Catalogue of the Library of George Hibbert, a copy with admitted faults. Priced at $95.