Californiana from the William Reese Company 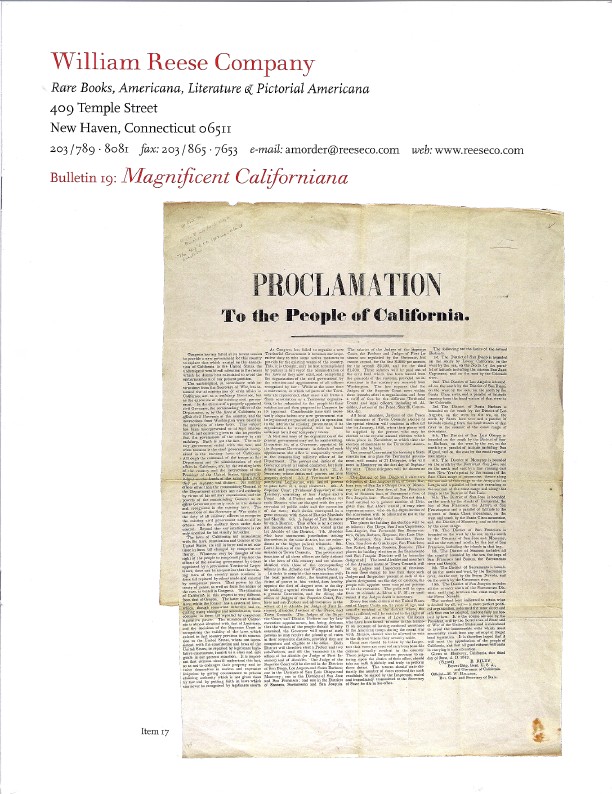 Californiana from the William Reese Company

The William Reese Company has issued their Bulletin 19:  Magnificent Californiana. This is not the California of movie stars, glamour and beautiful people. This is a grittier California, people eking out a hard living despite their spectacular surroundings. It is California as a Mexican state, briefly a sort-of independent land, again briefly an American territory, and concludes with the early days of American statehood. For most of this time it was a lightly populated place, home to scattered Indian tribes, Mexican missions, and a few other hardy settlers. Then, in 1849, gold was discovered, and Americans from the east flocked west to find their fortunes. Few did, but many stayed to settle down in this beautiful and climate-friendly land. Gold strikes may have disappeared, but the people kept coming. Here, now, are a few items from this collection of works from California when it was still a wild and mostly unsettled land.

We will start with one of the earlier looks at California, Relacion Historica de la Vida y Apostolicas Tareas del Venerable Padre Fray Junipero Serra… by Francisco Palou. It was published in 1787, when California was limited to a few Spanish missions and the scattered Indian tribes that had lived there since crossing over from Asia many millennia before. Palou's book is mainly an account of the life of Father Junipero Serra, the founder of the missions in Upper or Alta California, essentially today's U.S. state of California. The map shows 9 of what were eventually 21 missions founded by Serra, and appears to be the first map to show a boundary line between Upper and Lower California. Serra corresponded with Palou through letters, and these letters provide much of the information about California in this book, including descriptions of the land and of the Indian tribes and their customs. Item 1 is a first edition, second issue of Palou's work. Priced at $25,000.

Item 6 is a very early treaty between California and a foreign company. California was a Mexican state at the time, but the realities of long distances afforded it a certain degree of autonomy from Mexican authorities. California, then as now, was suffering from financial difficulties, and so signed this agreement with a Russian company, allowing that firm to hunt sea otters off the California coast. The "Russian Company of N. Arcangel" originally signed an agreement with California in 1823. Offered is the manuscript 1825 revision of this treaty, signed by Governor Luis Antonio Arguello, spelling out in greater detail the rights and obligations of the parties. Reese notes that this was the period of greatest Russian expansion along the Pacific coast of North America, far south of Alaska, then Russian territory. $12,500.

Item 9 is one of only five known copies, and the only signed in manuscript, of California's first declaration of independence. This is not from the "Bear Flag" revolution of Anglo settlers in 1846, but what was more an internal battle between Mexicans in California and Mexican authorities back in the capital. Beginning En el Puerto de Monterrey de la Alta California… dated November 7, 1836, it is signed by the leader of the revolt, Juan B. Albarado (Alvarado) and three others. It declared California independent, with Alvarado naming himself governor. This occurred at the same time as the Texas revolution, though its aims were less drastic than those of the Texians. The broadside was printed by California's second printer, Santiago Aguilar, Alvarado having forced California's legendary first printer, Agustin Zamorano, into exile three days earlier. The result of this revolt was Mexican authorities agreeing to recognize Alvarado and granting California more autonomy, for which Alvarado agreed for the land to remain Mexican territory. $65,000.