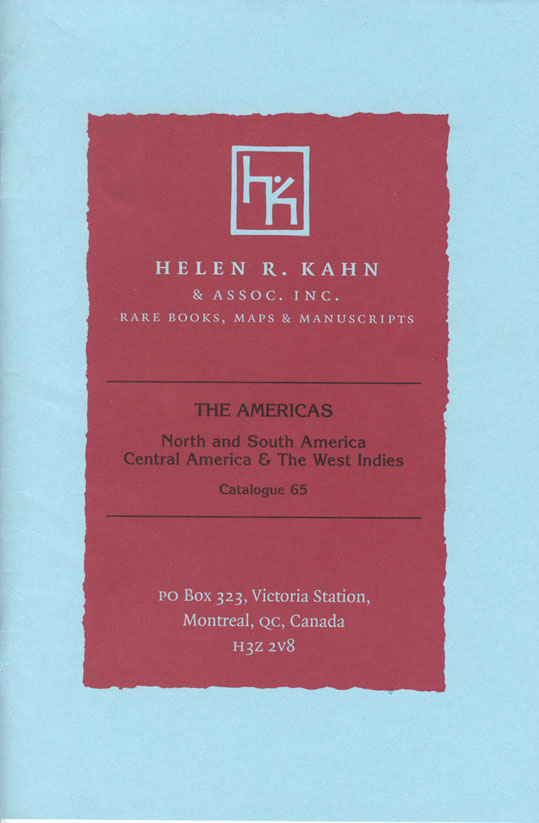 Helen R. Kahn and Associates of Montreal has issued their 65th catalogue of rare books, "The Americas." This includes 150 items pertaining to the western hemisphere. Here are just a few examples.

One of the best histories of New England in its time (1720) was The History of New-England Containing an Impartial Account of the Civil and Ecclesiastical Affairs of the Country to the Year...1700, by Daniel Neal. Quoting from "European-Americana," Kahn says it was "a classic for its time, written by a man who had never set foot in the country about which he wrote." Neal borrowed heavily from Cotton Mather and Oldmixon, and it has its share or mistakes, but is generally considered a good work for someone writing from such a distance. Item 125. Priced at $2,500.

Memoirs of an American Lady: with sketches of manners and scenery in America, as they existed before the Revolution was also written from a great distance in both space and time. The author, Mrs. Anne Grant, was an ocean and 40 years removed, but at least she had been there. Her father had served for the British in the Seven Years' War (French and Indian War). Mrs. Grant lived for awhile with the widow Margarita Schuyler, aunt to the future Revolutionary War General Philip Schuyler. Madame Schuyler is the "American Lady" of this book. Grant's Memoirs tells about life and the people in the Albany, New York, area. For those interested in reading her story, check out the following website: http://www.nysm.nysed.gov/albany/art/grant.html. Item 66. $300.

The Memoirs of Mrs. Coghlan...written by herself, and Dedicated to the British Nation... are the memoirs of a somewhat different type of lady. Mrs. Coghlan is best known for having an affair with Aaron Burr when she was very young. This would be followed by a brief, unhappy marriage and an "abandoned" life in which she still managed to become acquainted with notable personalities in Europe and America. This was a scandalous book in its time, and this copy included the suppressed preface most copies lack. Item 51. $775.