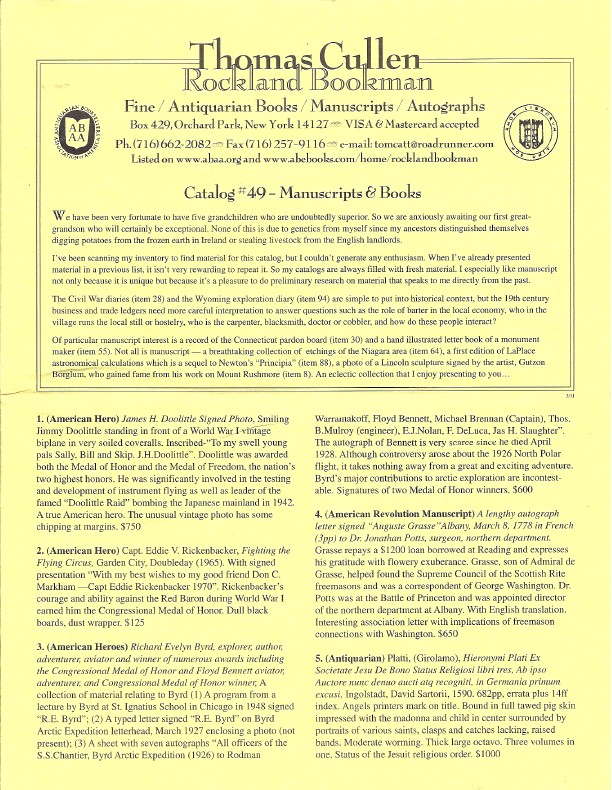 Thomas Cullen, Rockland Bookman has issued Catalog #49 - Manuscripts & Books. Cullen offers a collection of unusual items, a mix of uncommon books and one-of-a-kind manuscripts, mostly from the 19th century.  The manuscripts frequently cover day-to-day events in the lives of people who lived lives that were both simpler, yet more difficult than those we live today. Nothing was easy by today's standards. Among the personal items offered are diaries, business ledgers, even personal labor contracts for children, politely called "apprenticeships." You would not have wanted to be the apprentice in those days. Here are a few items from this latest Cullen catalogue.

Item 61 is a manuscript daybook from John Sanborn, a cobbler and general handyman from Poplin (renamed Fremont in 1856), New Hampshire. It runs from 1808-1837. The book recounts his activities as a shoemaker, but perhaps the most interesting part is a four-page section describing the year without a summer, or what was then known as "the year eighteen hundred and froze to death." That year culminated a series of volcanic explosions in far-off Indonesia, including the worst in recorded history in 1815. The ash spread around the world, dimming the sun. Some areas were affected more than others, and New England and Maritime Canada were particularly hard hit. New Hampshire already has cold winters, and cool nights in summer. Cool midsummer nights turned to frosts and even summertime snow that year. Crops were destroyed, leading to food shortages, extraordinarily high prices, and famine. Sanborn notes that July was "cold and backward," and something appeared to be covering the sun. That something was the volcanic ash. On the positive, the year featured some of the most dramatic sunsets ever seen, but that was "cold comfort" for farmers with failed crops and hungry people. Priced at $800.

Here is a series of daybooks from a family of carpenters that record the careers of a father and son, along with some other members of the family. They start in 1829 and run to 1876. The father was James Preston, born in Connecticut but who settled in Claridon, Ohio, where his account begins. James Preston appears to be a fairly strait-laced pillar of his community. He writes of attending church meetings, singing groups, and funerals. He makes all kinds of furniture and home accessories, such as cupboards and stairs. His entries run through 1860. Meanwhile, his son Reuben begins his daybooks in 1858. Reuben moves to Austin, and then on to nearby Merrelltown, Texas. Reuben's interests are less in going to church meetings, and more like "knocking about town among the sisters and to the grog shops." In 1865, "I celebrated my birth day by getting drunk at Sam Bloomers Still House." Item 76. $1,800.

Item 13 is a broadside order from the President providing a humanitarian exception to U.S. supported privateering during the War of 1812. The U.S. did not have a navy capable of providing serious competition to the British at that time, so the government authorized privateers to harass British shipping. However, President Madison issued these Additional Instructions to the Public and Private Vessels of the United States are not to interrupt any British unarmed vessels bound to Sable Island, and laden with supplies for the humane establishment at that place. Sable Island, off the coast of Nova Scotia, provided a rescue point for shipwrecks in the area. Scouts regularly patrolled the beaches for survivors of Atlantic shipwrecks, who often made their way to this island. Those survivors were provided food, shelter, and medical help until such time as the occasional vessel headed for that island could take them back to civilization. $1,250.