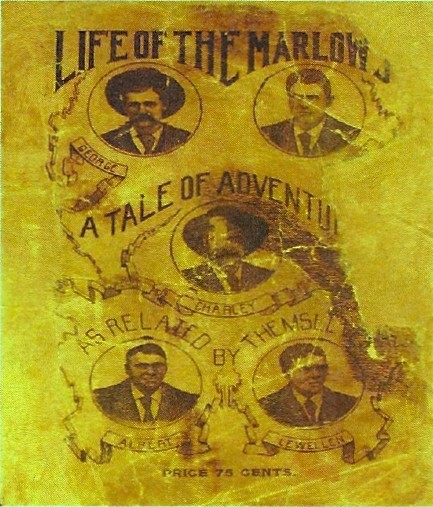 Item 71 is an autobiography of the first major Hollywood cowboy, William S. Hart. An easterner by birth, Hart spent much of his youth in the Dakotas, where he learned how to be a cowboy from firsthand experience, not acting coaches. He returned to New York to become a Shakespearean actor, but could not turn down the opportunity to portray the West in films. Hart became a major star during the era of silent films. However, his voice must not have translated that well, as his acting career slipped away with the introduction of talkies. His book is entitled My Life East and West, and includes material on some even more real cowboys such as Wild Bill Hickok, Bat Masterson, and Wyatt Earp. Hart was actually friends with Masterson and, in particular Earp, who retired to Los Angeles in the 1920s. This copy is inscribed by Hart. $150.

Item 109 is a first edition account of the Life of the Marlows as Related by Themselves. The Marlows were five brothers who managed to be in the wrong place at the wrong time, and one of whom accidentally killed a sheriff. As Wright Howes explained it, these, "Five respected, but nomadic, brothers, caught in a conspiracy concocted by a Texas sheriff, had to shoot it out with the county's entire male population. Only the two writing the story survived." The two who survived and two who did not were chained together and being transported when vigilantes attacked. Somehow, they managed to grab some weapons and shoot it out. Survivors and authors Charles and George Marlow were eventually exonerated. This book was the basis of the John Wayne film, The Sons of Katie Elder. This first edition, published in Ouray, Colorado, in 1892, is extremely rare. $40,000.