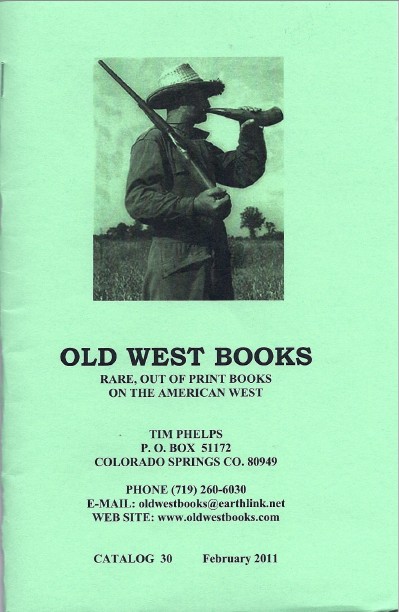 Old West Books has issued Catalog 30 of Rare, Out of Print Books on the American West. Not a lot more need be said to describe what can be found in this catalogue. We all know that the Old West was an adventuresome place, home to cowboys, Indians, thieves, rustlers, killers, lawmen, explorers, soldiers, travelers, settlers, fortune seekers, and just about anyone else willing to take on a certain amount of danger and adversity. This catalogue is a collection of accounts of their adventures and recollections. Most of these books, as one might expect, date from the mid-19th to the mid-20th century. These are a few of them.

Undoubtedly the most famous soldier in the West was General George Armstrong Custer. He is not famous for his military triumphs. He had one bad day at the office, but before that, his career was certainly brighter. Item 32 is a book he published two years before his unfortunate incident along the Little Big Horn. It is entitled My Life on the Plains or Personal Experiences with Indians. These were better Indian experiences than the one he had later. Custer was good at self-promotion, perhaps better than he was at soldiering. Priced at $1,750.

Custer would live on in personal memory until the middle of the 20th century. Here is his story from his last surviving compatriot:  I Fought With Custer. The Story Of The Last Survivor Of The Battle Of Little Big Horn As Told To Frazier and Robert Hunt… The man who told this story was Charles Windolph, a German immigrant who joined the army and fought under Custer that fateful day. Naturally, he was not with Custer during the battle, but was with Reno and Benteen. He later received the Medal of Honor for his actions along with a Purple Heart. Windolph was interviewed by the Hunts in 1946, 70 years after the battle, and he lived until 1950, dying at the age of 98. The first part of this book covers his reminiscences, while the second part contains various documents, letters, and eyewitness accounts. Item 84. $95.

Item 87 is a two-volume 1,229-page set on Refugio. A Comprehensive History of Refugio County from Aboriginal Times to 1953. Jenkins described this as "the most comprehensive compilation on the history of any Texas county." In the early days, it was home to the Karankawa Indians, then the Spanish, and finally the Texans and Americans. It was the scene of a battle during the Texas Revolution, and is just down the road from Goliad, where Santa Ana massacred a group of Texans in the Battle of Goliad. Santa Ana was repeating his earlier success at the Alamo, but the third time was not a charm, the Mexican General being forced to grant Texas independence after being routed at San Jacinto. Refugio's most famous son today is baseball pitcher Nolan Ryan, but he would have been an unknown six-year-old when this book was written. The author is Hobart Huson. $1,250.