Rare and Colorful Books from the Arader Galleries 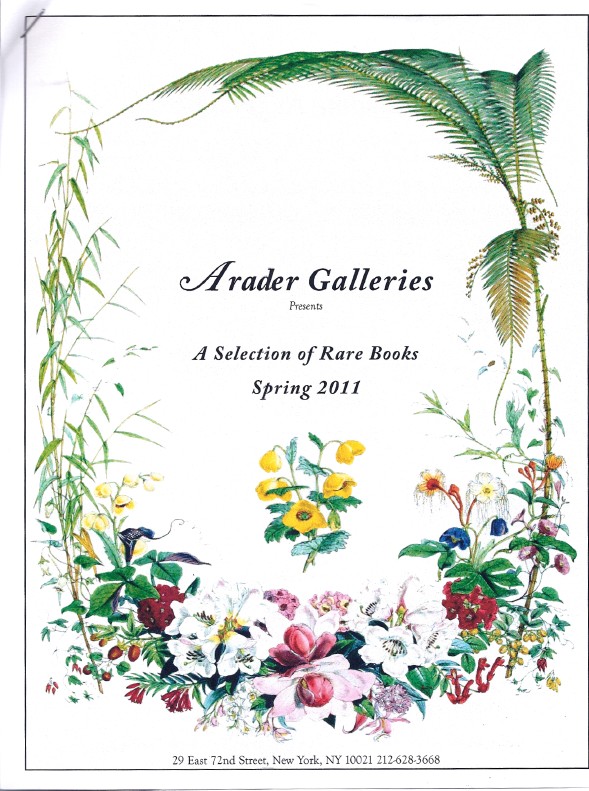 Rare and Colorful Books from the Arader Galleries

The Arader Galleries is offering A Selection of Rare Books Spring 2011. There is a touch of spring in the works presented. Many of the items are color-plate books of flowering plants and birds, a sure sign that spring is coming. Others can be a bit darker, such as one of the more brutally honest looks at slavery by a Dutchman hired to help put down a slave rebellion. His account played an important role in turning public opinion against the awful practice. You will also find some major travel books in this catalogue from the Age of Exploration. Perhaps these too can be looked at as springtime books as they also represent new beginnings. The Arader Galleries are known for offering works of art as well as text, so books they offer usually come with illustrations that are bordering on works of art themselves. Here are some samples of the books offered by the Arader Galleries.

If bright colors and birds are a sure sign of spring, what could better combine these than a book about parrots? Actually, this one is about lories, which author St. George Jackson Mivart describes as "a very attractive group of small birds." Lories are colorful members of the parrot family that inhabit Australia and various South Pacific islands and parts of southeast Asia. Mivart's book is entitled A Monograph of the Lories, or Brush-Tongued Parrots, composing the Family Loriidae, published in 1896. It contains 61 hand-colored lithographs by the noted illustrator of birds Johann Keulemans. Keulemans' talent at creating scientifically accurate depictions of birds resulted in his illustrations being used in many ornithological works during the latter part of the 19th century. Author Mivart was an important biologist of the time, a man whose attempts to reconcile Darwin's theory of natural selection with his own Catholic faith ended up leading to major schisms with both. Priced at $24,000.

A list of the most important voyages of discovery would certainly include the three of Capt. James Cook. The first voyage was undertaken primarily to view the transit of Venus, which would help scientists discover the distance of the sun from the Earth. However, many more discoveries were made along the way, including the first mapping of the entire coast of New Zealand. The second voyage was perhaps the most important as Cook disproved the commonly held belief that there was a massive continent to the south. Cook sailed deeply into waters where such a continent was supposed to exist. The third voyage took Cook to the west coast of North America as well as discovering Hawaii. Part of the aim was to find a northwest passage. While that goal proved elusive, much was learned about the area from today's Pacific Northwest through Alaska. The Arader Galleries is offering a complete set of the official accounts of all three voyages, in first editions, ranging from 1773-1784. There are a total of ten volumes, eight of text plus two atlases. $74,000.

Next is an 1813 second edition (after the first of 1796) of one of the most influential depictions of slavery in the New World, John Stedman's Narrative of a five years' expedition against the Revolted Negroes of Surinam… Stedman, deeply in debt after the death of his father, signed on with Dutch forces to put down a slave rebellion in Surinam. This book is his account of the five years he spent there. It covers much about the land in great detail, including the operations of society, his interactions with various social classes from slaves up to the Governor, and the flora and fauna of the countryside. However, it was his account of slavery that gathered most of the attention. Stedman filled his role in helping to put down the rebellion, and was not an abolitionist, seeing slavery as something of a necessity. Nonetheless, he was horrified by the treatment of the slaves, which he vividly describes, including the brutality and torture used against them. His account, plus the illustrations of torture scenes he provided, would have a strong impact on people back in Europe, many of whom would see in this a call to put an end to slavery. There are 81 plates and maps in the book, including 16 of the finest engravings created by William Blake. $6,400.