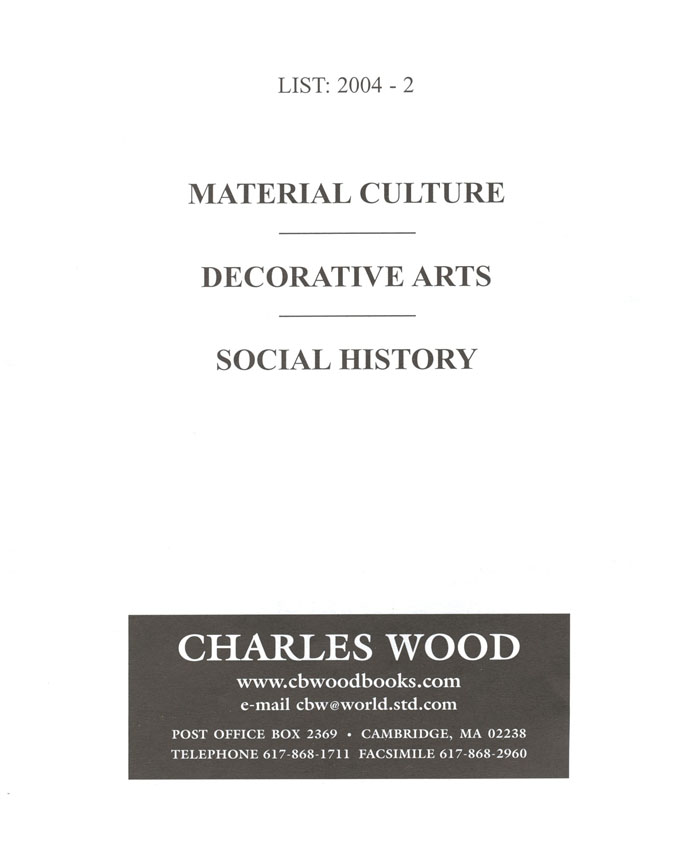 Charles Wood has issued his "List 2004-2," which covers "Material Culture, Decorative Arts, and Social History." In this catalogue you will find a great deal of material, primarily late 18th century to early 20th, covering such fields as home furnishings, furniture, cabinet making, managing the home, carriage making, art, lighting, tailoring, shoemaking, and training your servants. Many of the skills and behavior that went with this age have been forgotten by most, but this collection of many practical guides will serve as reminders to what the world was like, not just before Wal-Mart, but before Sears when they were still referred to as "Sears, Roebuck."

What is believed to have been the most popular furniture book in 18th century America is The Gentleman and Cabinet-Maker's Director...by Thomas Chippendale. Originally published in 1754, this is the third and most complete edition from 1762. This book was actually a trade catalogue, and states that it was "printed for the author and sold at his house..." Among those who owned a copy was Thomas Jefferson, who had a second edition. Today, Chippendale's name remains synonymous with a certain style of furniture. Item 7. Priced at $13,500.

If a genuine Chippendale catalogue is a bit pricey for your budget, how about a fake? Item 54 is Chippendale's Ornaments and Interior Decorations, in the Old French Style... Problem is, they weren't Chippendale's ornaments and decorations. Publisher John Weal had obtained the plates of another 18th century designer, Matthias Lock, in the 1830s. Unfortunately, Lock was little remembered by then. Being an astute businessman, Weal substituted the more famous Chippendale's name for Lock's when publishing the book. This wasn't the only time. Weal similarly erased the name from plates of furniture created by Thomas Johnson, substituting Chippendale's name. $850.

Item 48 is a "flap book" from around 1905 in remarkably good condition. "Flap books" were designed to show the inner workings of things, be they machines, humans, animals, etc. Foldout overlays enabled the owner to see just how these things worked. This one focuses on various types of motors. It's called Le Mecanicien Moderne par une Comite d'Ingenieurs Specialistes, printed in Paris. $2,500.