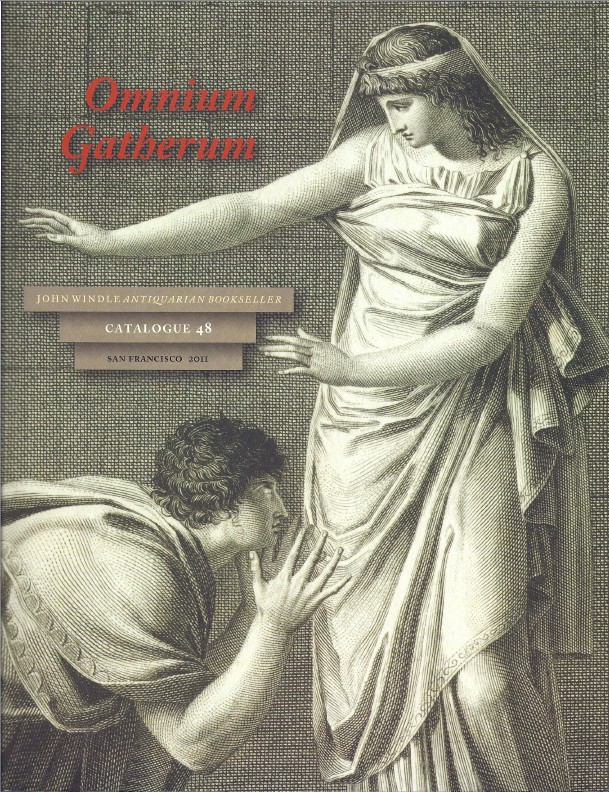 John Windle Antiquarian Bookseller has issued his 48th catalogue, Omnium Gatherum. He explains that this erudite-sounding Latin term "is a fancy way of saying a hodgepodge."  Among the subjects included, Windle notes, there are illuminated manuscripts, early printed books, William Blake works, illustrated books and fine bindings, modern first editions, children's books, bibliography, and association copies. A hodgepodge in any language. Here are some of the pieces in this selection of 99 fully described and illustrated books and manuscript items.

We start with a book that combines one of the most important social issues of several centuries with the magnificent engravings of William Blake: Narrative, of a Five Years' Expedition, Against the Revolted Negroes of Surinam… The author of this 1796 book, John Stedman, was sent with Dutch forces to Surinam to put down a slave rebellion. He performed his duty, but came away horrified by what he had seen. He was appalled by Europe's willingness to commit atrocities against others for the sake of cheap resources. Stedman points out that not only were the slaves dehumanized, but the same could be said for their masters, who came to routinely act in the most inhumane of ways. Blake was himself deeply affected by working on this book and was a vigorous opponent of slavery. Item 34 is a large paper copy of this first edition, all plates finely colored. Priced at $29,750.

Item 69 is something of a work of proto-genetics by notable French scientist of the 18th century Pierre Maupertuis:  Dissertation physique a l'occasion du negre blanc, published in 1744. Maupertuis would expand on his beliefs a year later in Venus physique, but his Dissertation introduced his ideas. Maupertuis did not accept the dominant view at the time of preformation, that the embryo was "preformed" (likely in the egg, though possibly in the sperm). Maupertuis reached his correct conclusion from the basic observation that children carried characteristics of both the mother and father, seemingly obvious, but this was the 18th century. The baby needs more than one to tango. He also rejected the theory that some sort of "essence" of the other parent affected the child, sticking to a strict mechanist explanation. He concluded that some sort of particles were combining to produce the offspring, particles we might today call genes. $2,250.

Item 60 features works of the Welsh artist Bert Isaac. Isaac was noted primarily as a landscape painter, though his prolific career produced different varieties of work. Despite illness, Isaac managed to keep painting almost until his death in 2006. The year prior, a whimsical book of his art was published by the Old Stile Press. It consists of illustrations he created for books back in the 1940s and 50s. There was just one oddity about these books - they didn't exist. The books were fictitious though the artists and writers who supposedly created them weren't. Isaac evidently created these dust jackets and illustrations for his own enjoyment, not because he was commissioned to draw them. They sat in his archives for close to half a century before this compilation of drawings was brought together for this book, titled …for Books that Never Were. It was printed in a limited run of 100 copies, and is signed by Isaac. $275.