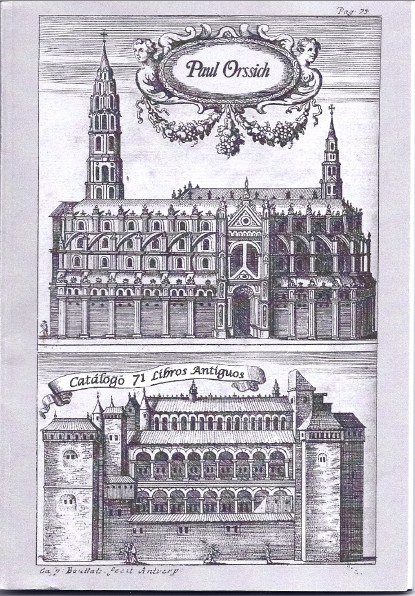 Paul Orssich recently released Catalogo 71 Libros Antiquos. As one might expect from a catalogue so named, the focus is on works related to Spain. That's a bit too narrow a description, as Portuguese related works are also covered, so this is more an Iberian catalogue. As such, there is also material dealing with South and Central America, most of that land once having been colonies of Spain or Portugal. As befitting a Spanish book dealer located in London, the books are divided primarily between those in Spanish and those in English, with an occasional title in a third language. Many of the books were written by English men and women who visited Spain and Portugal, either as tourists, diplomats, or military personnel involved in the incessant wars that took place in Europe in earlier days. Our focus will be primarily on the English language books in deference to this reviewer's limited comprehension of Spanish. Now, here are a few of the 170 titles offered.

We will start with the earliest of Spaniards, though it is doubtful they considered themselves as such:  Fossil Man in Spain by Hugo Obermaier Professor of Prehistoric Archaeology at the University of Madrid. Published by the Hispanic Society of America in 1924, its Vice-President, in his introduction, describes the work as "Absolutely essential to the understanding of the history of Spain." Professor Obermaier was one of the era's noted scholars and researchers in the field of pre-historic archeology and the diffusion of man through Europe during the Ice Age. At the time of this publication, Obermaier was conducting excavations in the cave of Altamira in Spain. Its walls are covered with prehistoric cave drawings, and excavations indicated it was populated 15,000 - 20,000 years ago, though some more recent evidence indicates some drawings may go back almost twice as far. Item 117. Priced at £70 (British pounds, or approximately US $113).

This book covers an era not nearly so ancient, but still a much earlier time, the eight pre-Columbian centuries in Spain. A divided Iberian peninsula in the post-Roman era fell to Moslem invaders from North Africa, better known as the "Moors," in 711. They moved rapidly forward, capturing all but the northernmost part of the peninsula from the Vandals and others who had conquered the land in the declining years of Rome. They would inhabit the land for almost eight centuries, though for much of that time it was a slow decline as local Christian kingdoms gradually seized power. By the 15th century, the Moors were pushed back to the southernmost areas of the peninsula, and in 1492, while Spanish ships under Columbus were engaged in explorations to the west, Ferdinand and Isabella expelled the last of the Moors. Item 3 is The History of the Mohammedan Dynasties in Spain… This is an 1840-43 translation of the early 17th century work of Ibn Mohammed Al-Makkari. Al-Makkari's history is particularly important as he had access to numerous 9th-14th century sources that have since been lost. £1,200 (US $1,950).

Henry Swinburne was the son of an English baronet, which enabled him to live well without having to make a living. After some time at their estate, Swinburne and his wife decided to travel. Being Catholics as well as nobility, doors were open to them in Spain, France, and other Catholic countries. That connection would eventually lead to minor diplomatic posts, including Swinburne being sent to negotiate a prisoner exchange with France late in the 18th century. However, it was earlier on that he conducted most of his travels, some of which are described in Travels through Spain, in the Years 1775 and 1776. In which several Monuments of Roman and Moorish Architecture are illustrated by accurate drawings taken on the spot. Swinburne not only was a writer, but a skilled artist as well. Offered is the 1779 first edition of his work. Item 147. £1,100 (US $1,787).  A 1787 second edition is also available. Item 148. £900 (US $1,462).

George Ticknor was another man who grew up under circumstances that did not require him to struggle for a living. His father was a founder of the first insurance company and the first savings bank in Boston. The result was he became an academic, a writer, and during his residence in Europe, a collector of books. His specialty, both as an academic and collector, was the literature of Spain and Portugal. Ticknor was also a great benefactor of worthy causes, notably as one of the founders and first trustees of the Boston Public Library, which opened its doors in 1852. When he died in 1871, Ticknor left his book collection to Boston Public. Item 159 is a Catalogue of the Spanish Library and of the Portuguese Books bequeathed by George Ticknor to the Boston Public Library, by James Lyman Whitney, published in 1879. £180 (US $292).