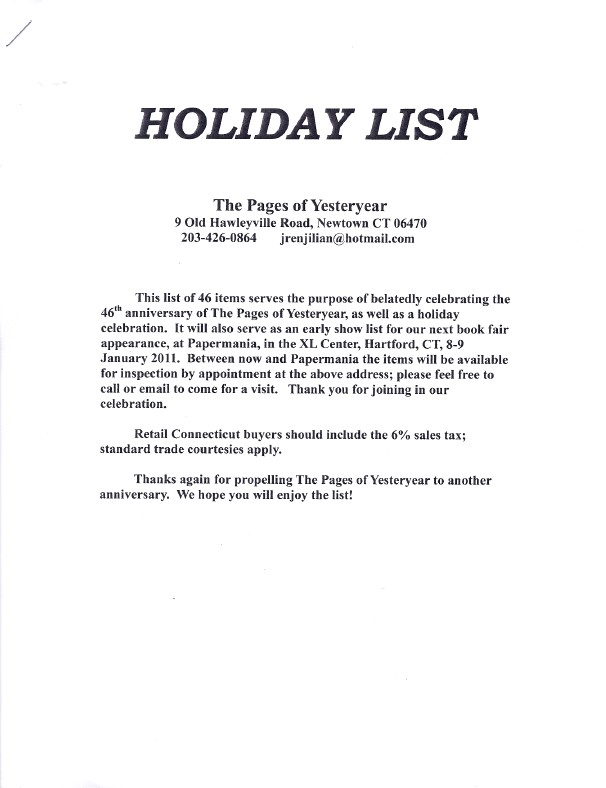 This month we have our first catalogue from The Pages of Yesteryear, of Newtown, Connecticut. We will admit to being a bit late as this is titled Holiday List. Easter? Not likely. We are late, but this is such an interesting and eclectic collection of material it is worth a look anyway. The catalogue contains books and manuscripts you are not going to find everyday.

John Renjilian's Holiday List offers 46 items. That number coincides with The Pages of Yesteryear's years in business - 46. This business may be qualified for the appellation "antiquarian bookshop" in more ways than one. Now, let's take a look at a few of the unexpected items to be found in this list.

Item 5 is A Military Genius. Life of Anna Ella Carroll, by Sarah Blackwell. Anna Carroll is a somewhat elusive figure to history, a very smart lady if not a genius, whose influence was significant, but it is still debated whether it was essential or was she more a self-promoter. Ms. Carroll was the daughter of a Maryland Governor who became deeply involved in politics. As the parties realigned in the years leading up to the Civil War, she was a Whig, then a Know Nothing, and finally a Republican. She wrote political pamphlets, anonymously as a woman's voice might not be heeded in those days. They were apparently very well written and very effective for her causes and candidates. Once the Civil War began, she became a behind-the-scenes advisor to President Lincoln, and was sent to gather information in St. Louis. She sent back military advice, recommending an attack by Union forces along the Tennessee and Cumberland Rivers rather than the heavily fortified Mississippi. This strategy was followed by the Union, and resulted in their first major victories, but it is unclear whether the decision to so attack resulted from her advice or was independently reached by the military. After the war, she spent most of her life filing claims for payment for her services, without much effect. However, her being brushed over led to support for her cause from the Woman's Suffrage Society, which published this biography in 1891. Priced at $75.

Item 35 is a letter from "Alice," whom the catalogue describes accurately as "a young lady it would have been fun to know." It was mailed from Providence on February 22, 1860, to her brother David. Alice and David were apparently two of seven siblings. Alice was staying with an aunt and uncle, and while she had been "begging and teazing" them to let her go to a ball, so far she had been denied. That was evidently about change. Most of this letter is written as a poem, and as Alice explains:

"Next week to a ball this child will be took,

To shake for awhile her dear little foot;

Some ladies will be there with dresses so low,

That if babies were there for their dinners they'd crow."

Alice also inquires of her brother about a special male friend. $100.

Item 19 is a collection of 30+ letters and other items, not nearly so cheerful as that of young Alice. They pertain to Mary Hartwell and her family, many coming from Edwin Miller, a printer in Hartford, Connecticut. At one point, Miller expresses his wish that his letters be destroyed after they were read, but obviously Hartwell paid no heed to his reasonable request. One item is a most interesting document from 1881 in which Miller and Hartwell sign a pledge to live together while avoiding the "bondage" imposed by legal marriage. However, they recognize that society may make this arrangement difficult, whereupon they get married and become absolutely miserable. Two years later, a friend tells Mary the two are completely unsuited for each other, and some of the letters from Miller show a strained relationship. Mary lived much of the time in Vermont though Miller worked in Hartford. The marriage was most unusual for its day in that Mary was already 40 by the time she married and there is no sign of a previous "bondage." However, there is a letter two decades earlier signed "Mary" about bearing an illegitimate child, that she wishes her mother to raise, but it is not clear that this is Mary Hartwell, and nothing more about this child appears. $750.

Item 6 is the Memoir Rufus R. Dawes, privately printed in 300 copies by the De Vinne Press in 1900. Dawes was an officer who served in numerous battles during the Civil War, including Gettysburg. He returned home to Marietta, Ohio, where he was a quite successful in the lumber business, served one term in Congress (he was defeated for reelection), served for 28 years as a trustee of Marietta College, and was offered the ambassadorship to Persia by President McKinley but declined due to poor health. He died in 1899. He had four successful sons, three of whom became involved in politics, and one of whom, Charles Dawes, served as Vice-President. As we all remember, Charles Dawes was Calvin Coolidge's Vice-President. $125.

The Pages of Yesteryear may be reached at 203-426-0864 or jrenjilian@hotmail.com