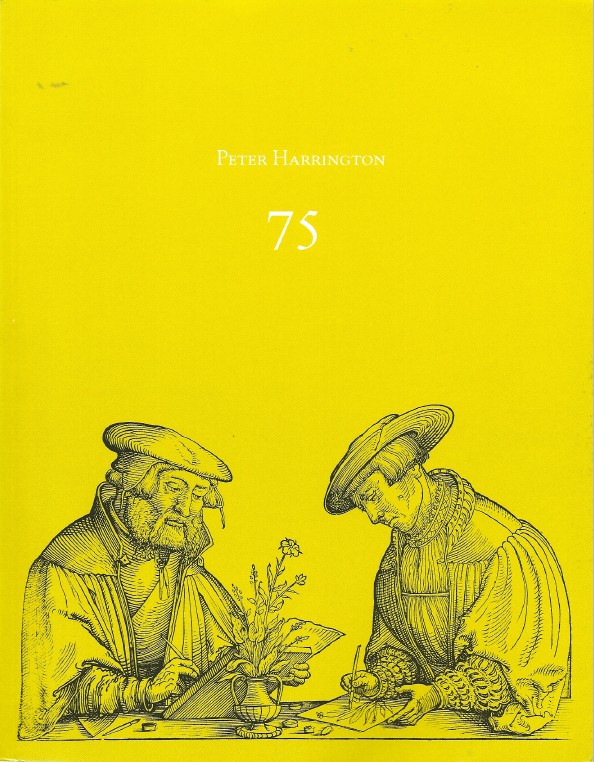 Peter Harrington has issued 75, perhaps the shortest title for a catalogue we have seen. This not only places the catalogue in Harrington's numerical sequence, but describes the number of items offered as well. Each of these is a work of major significance and importance. Many are rare, but none are obscure. Others are not terribly rare, but of high value anyway because of the law of supply and demand. There are never enough copies of books such as Darwin's Origin of Species to fill the demand for works of such monumental importance to our understanding of the world that we inhabit. We will look at a few samples of the books being offered, but with the understanding that this catalogue is filled with 70 more items of comparable significance.

We will start with the aforementioned On the Origin of Species. The first edition was published in 1859 and is not rare, 1,250 copies being printed which sold out almost immediately. Nevertheless, it is one of the most sought after of books by collectors. Item 17 will go you one better. Actually, it will go you five better. It is a collection of the first six editions of the Origin, all editions that were published in Darwin's lifetime. After the first, the next four editions were published between 1860 and 1869, adding 8,500 more copies in total. The sixth edition was first published in 1872 and contained extensive revisions, including the first appearance of the word "evolution" in its text. However, the copy offered in this collection is the final issue dated 1876. This added a few more corrections from Darwin, his final version, and the one used for later printings and reprints. Priced at £85,000 (British pounds or approximately $136,500 U.S. dollars).

For those wondering what will happen next in this troubled world, and therefore how to prepare for it, here is the book that tells you everything that will come to pass:  The True Prophecies or Prognostications of Michael Nostradamus, Physician… This is the first English edition, published in 1672 (coming over a century after the prophecies were first laid down). Everything that has come to pass since then was predicted by Nostradamus, the usefulness of his predictions being somewhat limited by the fact that they can only be recognized in hindsight, never in advance. Item 53. £9,750 (US $15,670).

Item 15 is a manuscript record from 1812-1837 kept by the Reverend Horace S. Cotton, ordinary (chaplain) of Newgate. It is not a record of prayers or inspirational thoughts. It's a record of executions. Cotton's job was to minister to the needs of the condemned in their final hours. Harrington informs us that Cotton was an unctuous individual whose sermons sometimes made the most trying of times even worse for the convicted. At one point he was censored for "harrowing the prisoner's feelings unnecessarily" in the case of a banker hanged for forgery. Among the many executed alongside of Cotton was Eliza Fanning, a servant convicted of attempting to poison her master's family, who many believed was innocent. Another was John Bellingham, who murdered Prime Minister Spencer Percival, the only prime minister ever assassinated. This manuscript record was illicit in that Cotton was not supposed to keep personal records of the executions, and this was a personal rather than official account. He has written out the names and dates of executions, along with the crimes and, at times, particulars. Of John Ashton, a highwayman, Cotton writes that he "sprung up on the scaffold after he was turned off and distinctly cried out 'Am I not Lord Wellington!' He was pushed off again by the executioner." An interesting aside is that Rev. Cotton owned a valuable library, and in particular a collection on angling. He was apparently a descendant of Isaac Walton's friend and co-author Charles Cotton. £5,000 (US $8,041).