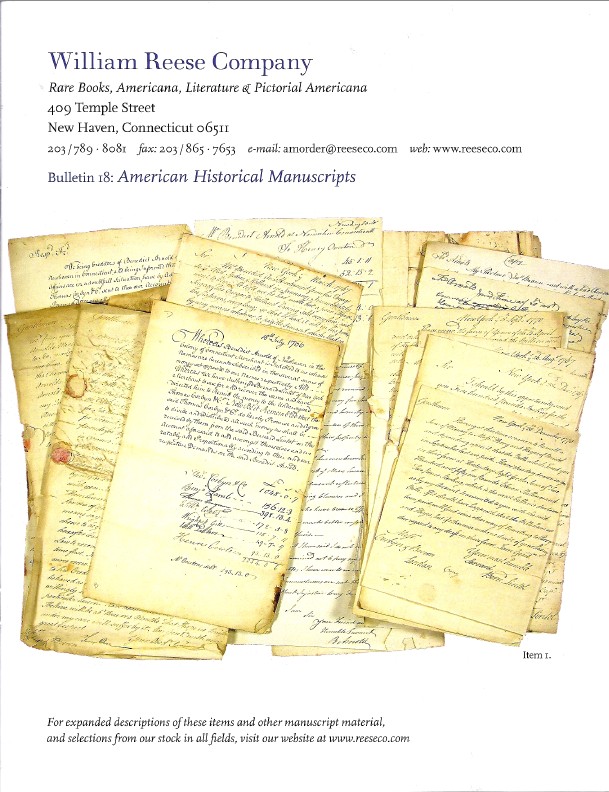 The William Reese Company has issued Bulletin 18:  American Historical Manuscripts. This is a collection of handwritten documents pertaining to American issues from the 18th and 19th centuries. Some are from noted American political figures, others from more ordinary citizens involved in major events, such as the Battle of Chippawa during the War of 1812. These are first looks at important times in American history. Here are a few of these manuscripts.

Item 1 is an archive of business papers from 1766-1782 of Benedict Arnold that gives us an inside look at America's most notable traitor. Arnold was a businessman, and after some initial successes, things turned sour for him. He was involved in trade when he suffered some serious losses in 1766. He owed far more than he could pay, so he blamed the Sugar Act and Stamp Act for his trade woes. Reese believes that this may have been his major incentive for the patriot cause - blaming the British for his business failures and bankruptcy. Arnold would become a general in the revolutionary cause, but would later sell out to the British. He would escape to England to avoid justice in America, only to find some old creditors there still looking for money. Some of these documents relate to that period. For the remainder of his life, Arnold would be involved in business dealings that often resulted in more controversy for the man whose life was a synonym for controversy. Priced at $42,500.

Item 37 is a draft of a letter from Martha Washington to John Adams, prepared by Tobias Lear, along with Lear's retained copy of an accompanying explanatory letter to Adams. These letters were written shortly after George Washington's death in December 1799. A movement soon began in Congress to have Washington buried in the new capitol building being constructed in Washington, D.C. However, in his will, Washington stated that he wished to be buried at his Mount Vernon home. President Adams had been given the delicate task of placing Congress' request to Mrs. Washington. Lear, a longtime aid to General Washington, evidently composed the response, with the help of Mrs. Washington. This draft contains numerous corrections made along the way. The second letter, Lear's retained copy of the accompanying letter, helps to explain Mrs. Washington's sentiments to President Adams. Ultimately, George Washington was buried at his Mount Vernon home. Priced at $85,000.

Here is an item that connects American political figures with the book trade. It is a patent for a papermaking machine, dated May 4, 1829. This machine was known as the "Agitator." In those days, machine-made paper (as opposed to hand-made) tended to tear easily as its fibers all ran in the same direction. Hand-made paper interspersed fiber in layers running different directions, giving it greater strength. This machine, invented by Reuben Fairchild of Trumbull, Connecticut, "agitated" the pulp to create interlocking fibers. In those days, patents were signed by the President (obviously, they had less to do back then). The result is this paper patent is signed by President Andrew Jackson, and is also signed by the Secretary of State, who was Jackson's successor as President, Martin Van Buren. $3,000.