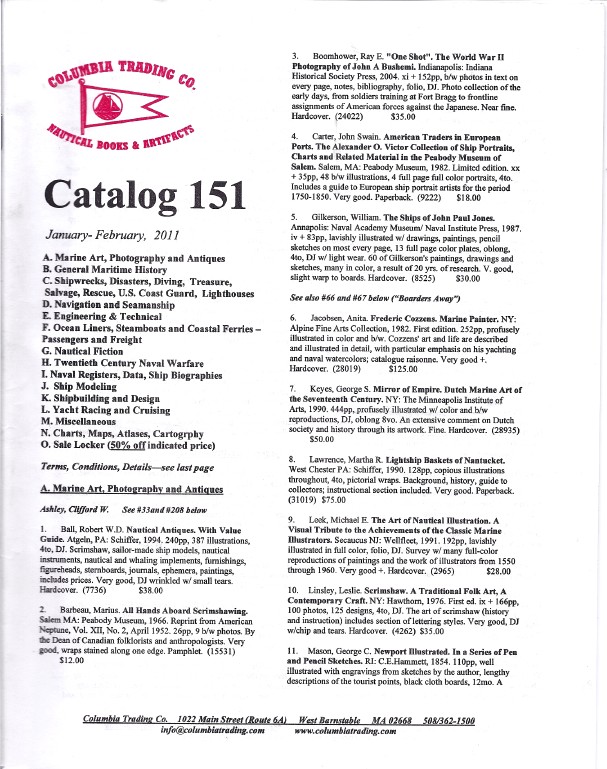 The Columbia Trading Company has published Catalog 151, dated January-February, 2011. We are only very slightly late on this review, close enough to call it, in effect, if not actuality, on time. Columbia Trading specializes in nautical books and related items. From battleships to yachts, lakes to oceans, pleasure cruises to racing, it's all here. There are over 600 items presented in this latest catalogue, and they all in one way or another touch on the world's waterways. Here are some examples of what you will find inside.

Item 56 is the autobiography of one of America's greatest naval heroes:  Autobiography of George Dewey. Admiral of the Navy. Dewey graduated from the Naval Academy in 1858, just in time to participate in the Civil War. He rose quickly after displaying his skills in the Union sea campaign to capture New Orleans. Once that war was over, however, America stayed out of war for a long period of time. Dewey earned great respect over the next three decades during peacetime, but few become military heroes during peacetime. Dewey would finally be called to action during the Spanish American War. He would lead American naval forces to battle in the Philippines. It was one of the most one-sided victories in the history of war. Dewey's forces thoroughly routed the Spanish in just a few hours, and at a cost of but one man. Dewey came home a hero. In 1899, Congress created the highest rank in U.S. naval history for Dewey, Admiral of the Navy, a position no one else has since attained. Dewey oversaw much of America's naval planning following the Spanish-American War. His autobiography was published in 1913. Dewey suffered a stroke the following year, just before the outbreak of World War I, which kept him from participating in that conflict. He died in 1917. This copy of his autobiography has a tipped in signature from Dewey. Priced at $45.

Item 30 is the story of an unusual gunboat during the Spanish American War:  Log of the US Gunboat Gloucester, published in 1899. The Gloucester was noted for her bold moves, her rapid-fire guns being used effectively against the Spanish. What is unusual is that she was an unprotected auxiliary ship that had previously sailed under a different name. In her previous life, the Gloucester was known as the Corsair, the private yacht of J. Pierpont Morgan and flagship of the New York Yacht Club. This log is an account of her life in combat. $150.

Here is a look at one moment in time at a ship that made its way from passenger travel to wartime use several times during its half-century career. Item 235 is the Dollar Steamship Line's S.S. "President Johnson" Deck and Accommodation Plan. Since the date is 1930 we can assume the President Johnson was named for Andrew, not Lyndon. This is a 21 x 16 foldout brochure for the cruise ship. The President Johnson began its career near the turn of the century as a passenger ship named the Manchuria, but was called into service during the First World War as a transport ship. After the war, she returned to civilian duty, and was renamed the President Johnson in 1928 when purchased by the Dollar Line. She would again be called into military duty during World War II transporting troops and supplies, and again to civilian duty after that war. She then received her third name, the Santa Cruz, running from Italy to South America, but was scrapped in 1952. $30.

Item 587 is the Harbor Chart-Book. New York to Boston, prepared by George Eldridge. It was published circa 1920. This is an elephant folio collection of 49 harbor and 8 coasting charts, designed to enable both yachtsmen and large steamships to make the journey from Boston to New York. Columbia notes that this item has become increasingly scarce as a result of copies being broken up to sell the charts individually. $1,450.

If there is one skill any sailor should have, besides being able to swim, it's tying knots. Here is a book that will teach you how:  The Ashley Book of Knots, by Clifford W. Ashley, published in 1944. This is "the ultimate knot book," including 7,000 drawings of over 3,900 knots. $95.