A Syndicated Sale of Gould's Hummingbirds from the Arader Galleries 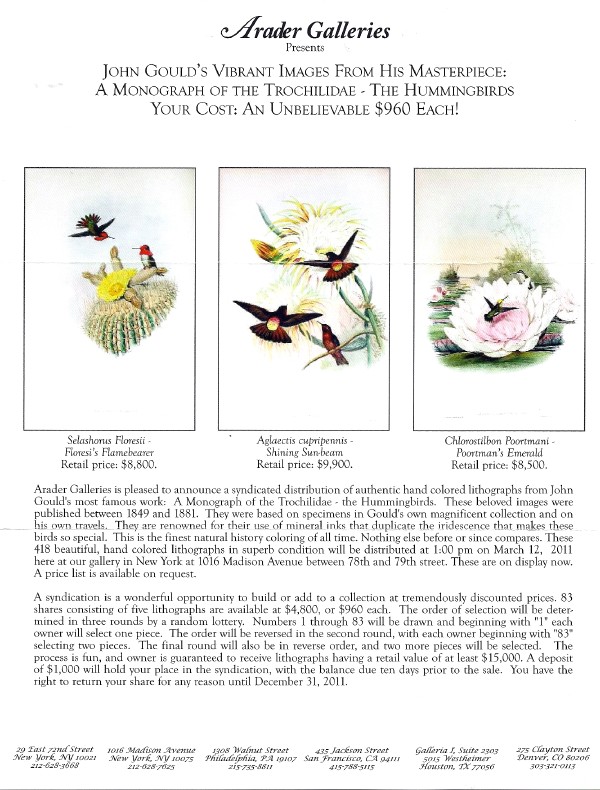 A Syndicated Sale of Gould's Hummingbirds from the Arader Galleries

The Arader Galleries will be conducting a syndicated distribution of hand-colored lithographic plates from ornithologist/artist John Gould's most spectacular work:  A Monograph of the Trochilidae - The Hummingbirds. Gould was England's Audubon. He devoted his life to drawing birds. He published books on birds of his native country, as well as those of Europe, Asia, Australia, and other lands. It was Gould who identified birds brought back by Darwin from his voyage on the Beagle. Most significantly, he recognized that birds Darwin had found on the Galapagos Islands were separate but related species to those found on the South American mainland. It was an important revelation towards recognizing the process of evolution.

There are 418 hand-colored plates in the volumes, which were released from 1849-1861. Gould drew the birds primarily from his own large collection, which he put on display in London. Some 75,000 visitors, Queen Victoria included, attended. Special mineral inks were used to create the birds' iridescence. Backgrounds of their natural settings were used to enhance the realistic appearance. Arader describes these images as "the finest natural history coloring of all time. Nothing else before or since compares."

The way the syndication works is that 83 shares are sold, each of which entitles the participant to five of the images. The cost is $4,800 per share, or $960 per lithograph. A random drawing is then held, numbers 1-83. Participants get to pick their first selection from the 418 images in the order their numbers are chosen in the drawing. Once the 83 have been selected, the order is reversed, with the participants each making two additional selections. Finally, the process reverts to the original order and each participant makes two more selections, resulting in five in all. Arader notes, "The process is fun, and the owner is guaranteed to receive lithographs having a retail value of at least $15,000.

The drawing will be held at 1:00 p.m. on March 12, 2011, at Arader's New York Gallery at 1016 Madison Avenue. You will need to act quickly if you wish to participate as a $1,000 deposit is required with the balance due ten days in advance. Participants retain the right to return their shares for any reason through the end of the year, an amazing display of confidence that they will be pleased with their purchases. If interested, contact Michael Foley at 917-435-5964 or michaelfoley@aradergalleries.com.