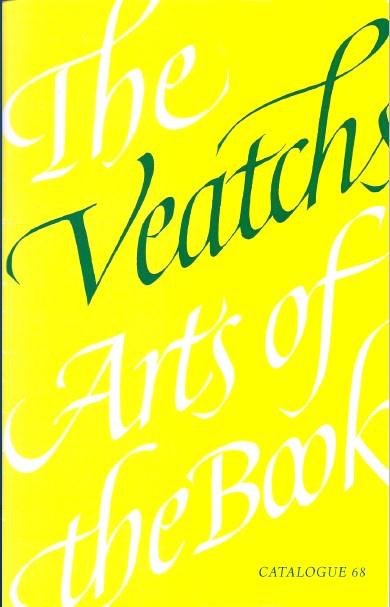 The Veatchs Arts of the Book has issued Catalogue 68. New Acquisitions for a New Year. The Veatchs offer books that double as works of art, featuring such items as fine bindings, private press books, type specimens, leaf books, artistic manuscripts, special papers and vellum, and more. Books and manuscripts that represent more than just textual content are the kind you will find in a Veatchs catalogue. Now, here are some examples.

Item 52 is Birds and Beasts from Shakespeare, published by the Cheloniidae Press of Alan James Robinson in 1990. Robinson, as well as operating the Cheloniidae Press and its successor Sea Turtle Press, is an artist, with a specialty in animals. There are 55 of Robinson's engravings, including 21 birds and 17 animals. Text is provided by Arthur F. Kinney, an English Professor at the University of Massachusetts. He explains the symbolism of these animals in Shakespeare's time. This book comes from a limited run of 155 copies, being one of 26 in quarter leather, signed by Robinson. Priced at $2,750.

Item 27 is a book that goes back to when four colors meant exactly that. The book is Le Livre de Quatre Couleurs (the Book of Four Colors) by Louis-Antoine Caraccioli, published in 1757. Today we think of four-color printing as being used to print a seemingly infinite rainbow of color shades, suitable for printing color photography. In Caraccioli's time, it was quite an advance to have a book printed in precisely four visible colors, though no more. This book features printing in blue, brown, red, and yellow-orange, chapters printed in different selections from among the four.  All four are used on the title page to surround an engraved vignette. The book is described as "a satire on the manners and mores of high society." $500.

Item 7 is a combination of American patriotic sentiment and books as art:  The Twelve Stars of Our Republic:  Our Nation's Gift-Book to her Young Citizens. This is an elaborate piece recognizing America's first 12 presidents, ranging from George Washington to Zachary Taylor. The timing, published in 1850, was interesting, perhaps an attempt to stir patriotic sentiment at a time when the nation was seriously beginning to fall apart. There were chromolithographed scenes by James Ackerman, a pioneer in color lithography, and steel engravings of the 12 presidents. The deluxe blue morocco binding with elaborate gilt patriotic symbols was produced by Edward Walker, whose bindery featured elaborately decorated leather bindings. While this work did little to bind the divisions between North and South, the timing of 1850 at least spared the publisher from having to include the next three presidents, three of the nation's worst, in its list of "stars." $800.