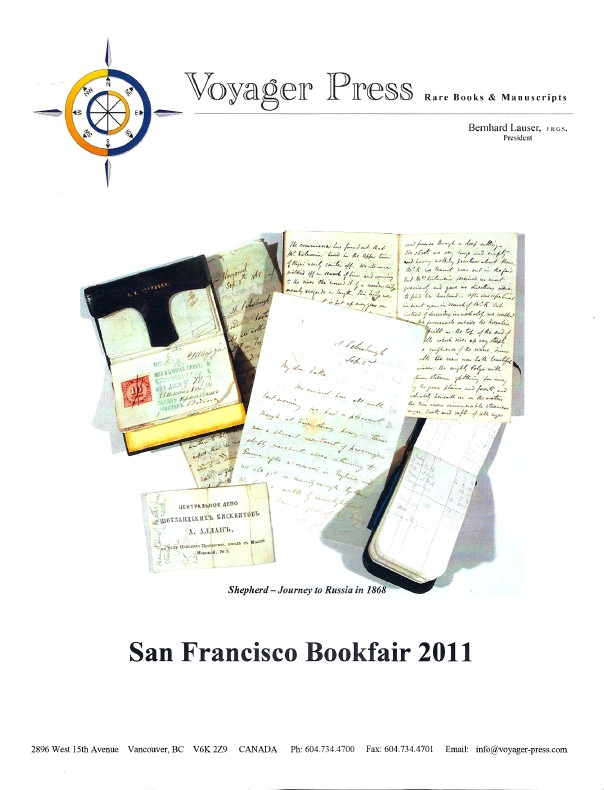 This month we review our first catalogue from Voyager Press Rare Books & Manuscripts. Voyager Press is located in Vancouver, B.C., Canada, and is headed up by Bernhard Lauser. Logically, for a firm named "Voyager," they specialize in travels and voyages. However, much of their material is not the typical travel account. They offer a mix of books on travels and explorations along with archive collections of various travelers, often consisting of letters, manuscripts, and other materials reflecting their journeys. This latest catalogue, prepared for and headed San Francisco Bookfair 2011, provides a good cross section of the material Voyager offers.

We will start with a book that solved one of the greatest mysteries of the era of exploration. In 1785, French Commodore Jean Francois de La Perouse set out on one of the most ambitious of explorations. His ships rounded Cape Horn that summer on the way to a journey that would cover most lands of the Pacific. He sailed up the South American coast, visited Easter Island and Hawaii, came back to Alaska and California, then headed west, visiting Russia, Japan, and China. Finally, he sailed into Botany Bay in Australia in 1788, met with the British there, and then headed east. He was never heard from again. Missions were sent to find his ships, but no trace was to be found.

Peter Dillon was a sailor who had worked on various trading vessels in his career. By 1826, he was placed in command of a vessel which was traveling to Fiji when he made a stop in the Santa Cruz Islands. There he found natives in possession of European objects, which he surmised must have come from La Perouse's ships. The natives told them they came from a wreck off of Vanikoro Island. Dillon managed to get the British in India to give him a research ship, which he took to Vanikoro. Dillon collected various artifacts and took them to France. He presented his findings to Barthelemy de Lesseps, the last living survivor of the La Perouse expedition (he had left it in Russia to bring La Perouse's notes back to France overland), who identified their source. Dillon's book (this is the first French edition from 1830) is entitled Voyage aux Iles de la mer du Sud en 1827 et 1828 et relation de la decouverte du sort de La Perouse. It is inscribed by the author to Marshal Etienne Alexandre MacDonald, who despite the Scottish name (his father came from Scotland), was French and was a major military leader during the Revolution and Napoleonic Wars. Priced at $9,750.

Not all voyages are intended for discovery. Offered is the logbook kept by Royal Navy Sub-Lieutenant F. Papillon from 1869-70 on HMS Monarch. It was at this time that George Peabody made his final journey home, quite final as Mr. Peabody was deceased. George Peabody was born in South Danvers, Massachusetts (later renamed "Peabody" in his honor), but settled in Baltimore, where he went into business as a merchant and later a banker. He was enormously successful. In 1837 he moved to London, where he lived for the remainder of his life. There he specialized in currency transactions and selling American securities, notably in the new American railroads. Again he was most successful. Peabody determined to give his fortune to worthy causes, earning the reputation as the first great philanthropist. He was admired in both England and America, as he contributed liberally to both nations' causes. When he died in 1869, the Queen gave him the extraordinary honor of temporary burial in Westminster Abbey. However, Peabody's will provided that he be buried in his hometown, so Prime Minister Gladstone arranged for the Monarch, the newest and most impressive ship in the Royal Navy, to bring him home. President Grant ordered the U.S. Corvette Plymouth to guide them. Papillon's log indicates the ship was visited by various important persons on Peabody's way home, including General Sherman and Admiral Farragut. The Monarch log is offered together with Papillon's log for the HMS Sphinx in 1867-68. $1,750.