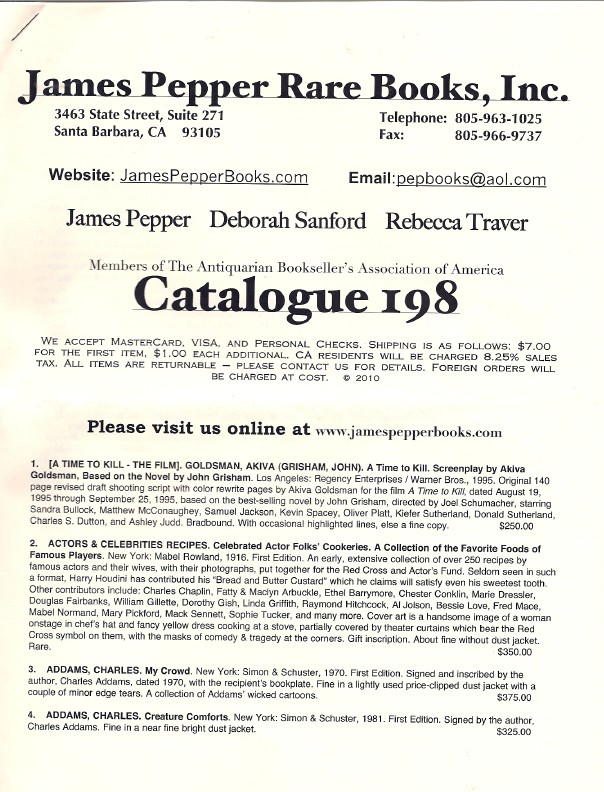 James Pepper Rare Books has printed their Catalogue 198. It offers 153 items in the fields for which they are known - literature, film and theater related material, and detective and mystery books. There are always a few surprises thrown in, such as Richard Nixon's high school yearbook, but most items fit one of these three categories. Here are a few from this time around.

Item 12 offers two of the greatest titles in literature. It doesn't offer the books, just the titles. It is a first edition of Robert Benchley's 20,000 Leagues Under the Sea or David Copperfield. My guess is that Benchley was humorously pretending to use a couple of famous titles to sell his book of essays that had previously appeared in various magazines, though I found one claim that he was testing out someone's assertion that you can't copyright titles. This copy comes with a typical Benchley inscription, this one to Sam Marx, head of screenwriting at the time (1934) at MGM Studios. MGM was in the process of putting out a film version of David Copperfield, and Benchley plaintively asks, "don't I get anything out of the picture you are making using the sub-title to this book? Yours for justice, Robert Benchley." The book was published in 1928. Priced at $1,500.

Pepper offers several books that will appeal greatly to collectors of novelist F. Scott Fitzgerald. Item 44 is a first edition (September 1920 printing) of his first novel, This Side of Paradise. The story of self-centered youth at Princeton in the post World War I era was an immediate success, and turned Fitzgerald from an unknown young man to a famous and popular writer almost overnight. Priced at $1,850. That same year, Fitzgerald also published his first collection of short stories, Flappers and Philosophers. Item 43 is a first edition, first printing of this work. $2,250.

Now for one more Fitzgerald book, and this is a one of a kind. Item 45 is a first edition, second issue (1925) of his greatest novel, The Great Gatsby. While any first of Gatsby is certainly very collectible, this is the copy that belonged to actor Warner Baxter. Baxter was the actor who first portrayed Jay Gatsby on film, a silent version released in 1926. This copy was presented to Baxter by the director and cast of the film. Baxter would go on to make the transition to "talkies" quite successfully, winning an Academy Award for best actor in 1929's In Old Arizona. The actors and actresses signing the book were Lois Wilson, William Powell, Neil Hamilton, George Nash, Hale Hamilton, and Carmelita Geraghty. Perhaps the one of these best known today is Powell, who later starred as The Thin Man in several films. Neil Hamilton stuck around long enough to play the commissioner in the 1960s Batman television series. Sadly, all copies of the silent film of Gatsby have been lost. Priced at $55,000.

What do Tennessee Williams and Geraldo Rivera have in common? Stumped? How about if we add Marlon Brando to the mix; does that make it easier to figure? Item 147 is a photograph from 1975 of Williams and Rivera together. It was taken while Rivera was interviewing Williams for an ABC TV special on Marlon Brando. Evidently, Brando had the good sense to stay away. Williams and Brando are gone now, but Geraldo lives on. $125.

Item 103 is that Nixon yearbook, the 1930 edition of the Whittier (California) Union High School Cardinal and White. The future President appears in several places, including an essay he has written entitled American Progress - Its Dependence Upon the Constitution. If only Nixon had showed a little more deference to the Constitution himself 42 years later he might not have concluded his career with such a maligned reputation. $850.

James Pepper Rare Books may be reached at 805-963-1025 or pepbooks@aol.com. Their website is www.jamespepperbooks.com.