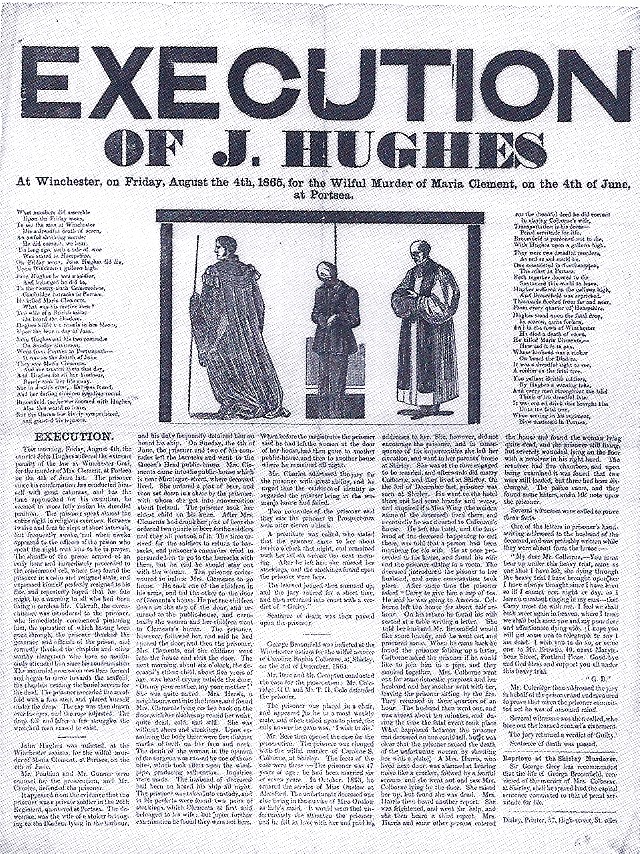 Item 7 is an account of another murder, though the writer did not know it at the time. It is Life of Guiteau, the Would-be Assassin of President Garfield. In time, the "would-be" would be dropped from Guiteau's appellation. When he shot Garfield in July of 1881, the President was expected to make a recovery, and it was evidently during this period that this account of Guiteau's life was written. Unfortunately, Garfield's health later took a turn for the worse, and two and one-half months after he was shot, President Garfield died. $350.

In the days before we had television and the internet to bring us sensational stories, broadsides were the favored vehicle. Item 17 is a such a broadside, headed Execution of J. Hughes. It comes complete with a gruesome depiction of a hanging (see the image on this page). This all happened in England in 1865. John Hughes evidently visited one Maria Clements at her home while her husband was at sea. Mrs. Clements had become too friendly with Hughes at a tavern that night. He followed her home, and what followed was a gruesome sex-and-murder, Hughes reportedly biting through her jugular vein. More details can be found in this broadside, including an account of the execution, and even a poem. There is also an account of second murder, but this murderer had his sentence commuted by the Queen to life. $750.