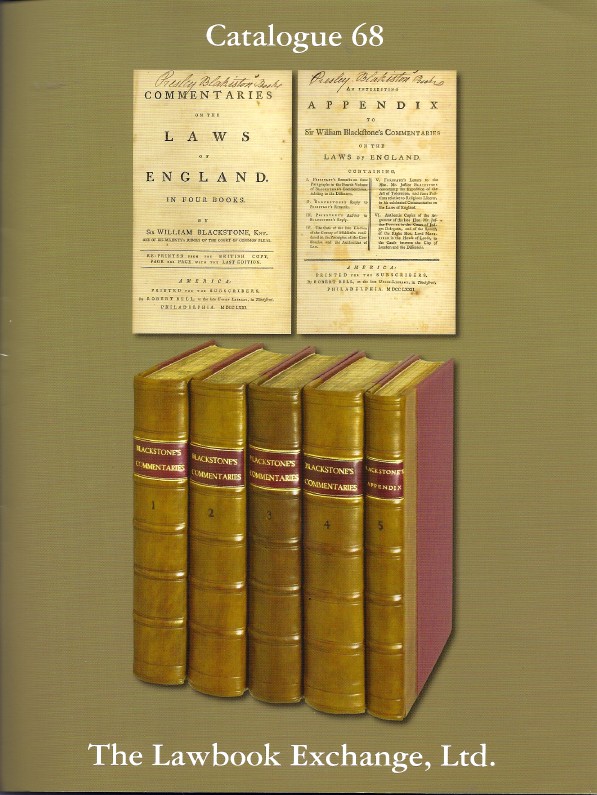 The Lawbook Exchange of Clark, New Jersey, has issued their Catalogue 68, Recently Acquired Books, Manuscripts and Ephemera. It includes both antiquarian and recent publications. We will focus on the old. There is a mix of more technical, legalistic if you will, writings with those of greater common appeal. We will mention some of each as we take a look inside this latest catalogue.

Two and a half centuries after it was published this work remains the most important legal text in the history of the English-speaking world. Item 9 is a first edition of Commentaries on the Laws of England, In Four Books, published 1765-69. William Blackstone's work is better known simply as Blackstone's Commentaries. The Lawbook Exchange notes that even through the 19th century, this was the source of learning for most of America's self-taught lawyers, such as Abraham Lincoln. The Commentaries provided an overall picture of the operation of the law, rather than being a user's guide, to help those in the field understand its fundamental principles. Such is essential when there is no clearly on target case law on which to rely. This set includes the rare Supplement to the First Edition (1766), which contains additions that would be incorporated in the second edition of volume 1. Priced at $12,000.

Item 10 is a first edition, first issue of the American edition of the same. This was published in Philadelphia in 1771-72. This set is pictured on the cover of the catalogue. $17,500.

Item 4 is a set of legal rules for what is essentially an illegal activity:  Reglamento Provisional de Corso:  A Provisional Ordinance to Regulate Privateering. Privateering is essentially legalized piracy, used at times by governments to augment their naval power. This code was adopted in 1817 for mariners providing their services to the United Provinces of South America, later known as Argentina. Argentina was then fighting Spain for its independence and lacked a navy to combat that of Spain. The fact that these rules were printed in English as well as Spanish is indicative of the participation of American mariners in this legalized form of piracy on behalf of Argentina. This is not surprising as many American mariners had patrolled the seas in this fashion on behalf of their own nation a few years earlier during the War of 1812. At that time, America similarly suffered from a lack of a navy capable of balancing that of the British. In this ordinance, Argentina sets out humanitarian regulations which privateers acting on their behalf must follow, including prohibitions against cruelty and indiscriminate violence. $1,500.

Item 62 is a typescript from Hannibal E. Hamlin of the State of Maine vs. Alice F. Cooper. This Alice Cooper was a female housekeeper, not a male rock star, while this Hannibal Hamlin was a regular lawyer, not Lincoln's Vice-President (however, he was the son of Vice-President Hannibal Hamlin). Seems this Alice Cooper was rocking and rolling with a young man who was apprenticed to her blacksmith husband. Then one day the young man told her he had found a lady his own age, which apparently did not sit well with Miss Alice. Two days later, the young man was shot to death in her chair. Alice claimed it was suicide. The prosecution presented contrary evidence, such as the angle of the gunshot wound coming from the top of his head, that she had purchased the gun the day before, and that she had sewn a pocket in her dress to hide it. Nevertheless, The Lawbook Exchange noted, "unbelievably, she was a acquitted." $750.