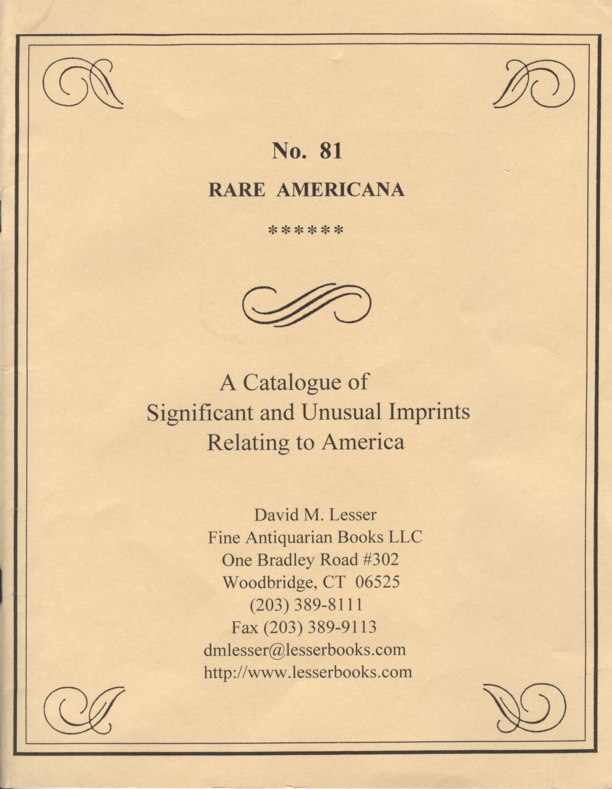 David M. Lesser Fine Antiquarian Books has issued their 81st catalogue of rare Americana. This is an interesting collection of political, business, and religious documents from the 18th and 19th centuries. Many provide insights into the controversies of the day, some virtually forgotten, others still part of our national psyche.

For those who think rough and tumble politics is something new, Lesser has a series of pamphlets that are ridiculous enough to have been written today. John C. Fremont was the first Republican candidate for president, and that candidacy elicited this publication: Black Republican Imposture Exposed! Fraud Upon the People! The Accounts of Fremont Examined; Showing an Astounding Disregard of the Public Interest, Only to be Accounted for by Extravagance, Recklessness, or an Utter Want of Judgment! Fremont was a surveyor and explorer known as "The Pathfinder," an image that made him a popular figure. In this pamphlet, he is attacked for supposed fraud in the purchase of horses ten year earlier when serving in California. Item 47. Priced at $250.

That was the mild criticism. The opposition became more serious with Infidelity and Abolitionism. An Open Letter to the friends of Religion, Morality and the American Union. Fremont was evidently no friend to any of those. He is accused of such dastardly behavior as advocating social equality of Blacks, free love, and political affiliation with "unsexed females." Unfortunately, Fremont was not able to get the "unsexed female" vote to the polls, so he lost. You've got to get your base out on election day. Item 58. $250.

Nathaniel Appleton preached a sermon on May 26, 1742, which was transcribed in the following: The Great Blessing of Good Rulers, Depends upon God's Giving His Judgments & Righteousness to Them. A Sermon Preached Before His Excellency William Shirley, Esq: Governour...(of Massachusetts). In his sermon Appleton proclaims, "God forbid that we should have any irreligious, prayerless Rulers among us." Hopefully Governor Shirley was a God-fearing, righteous man. Otherwise, he must have been squirming in his seat through this lecture. Item 3. $500.