Some Outstanding Books from the Arader Galleries 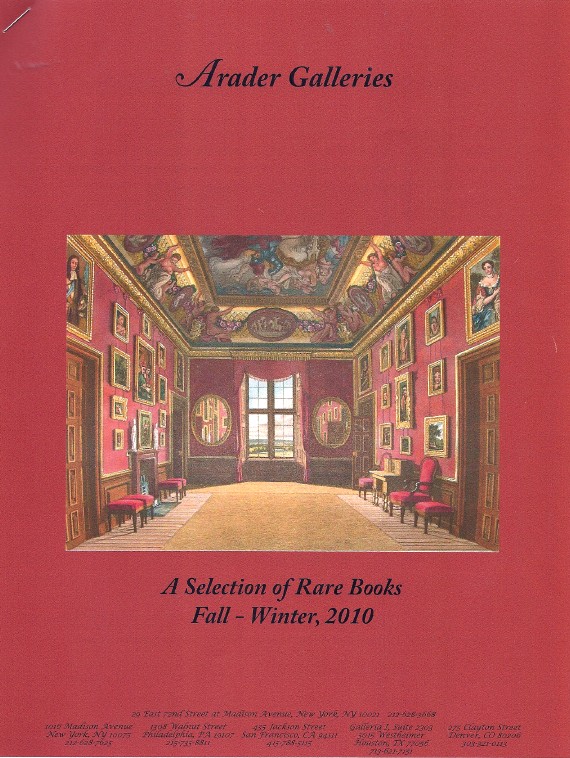 Some Outstanding Books from the Arader Galleries

The Arader Galleries has offered A Selection of Rare Books for the fall and winter season. While we're a tad late, it is still winter, and the books are still as enticing as ever. A few of them could fairly be described as for collectors of well above average budgets, but for those with more in their bank accounts than on their bookshelves, there are some worthy trades to be made. The Arader Galleries offer top tier material in top condition, always the preference of collectors at the highest end. Here are a few.

We will start with the most notable of all American color plate books, John James Audubon's The Birds of America. Offered is a first octavo edition, published 1840-44. Audubon was both a great ornithologist and artist. Originally, he published his work in a larger, double elephant folio size. It was spectacular, but the cost of production was so great he was forced to sell the work at a price few could afford. Audubon made no money for his efforts until he conceived of the idea of selling his book in a reduced size, octavo format. The octavo version was a financial success for Audubon, making him if not wealthy, at least prosperous. The octavo edition was not merely a scaled down version of the elephant folio, but one to which Audubon added 65 new plates, raising the total to 500. All are hand colored. A first octavo Birds of America is not inexpensive, this one being priced at $145,000. However, it should be noted that this is pocket change compared to the elephant folio, the world's most expensive printed book, a copy having been sold last month at auction for over $11 million.

From drawings of birds we go to those of flowers, a collection of proof copies of the plates for Gerard van Spaendonck's Fleurs dessinees d'apres nature... This book was published around 1800. Offered is a copy of the proofs with a manuscript title Fleurs de G. Van Spaendonck. These 25 stipple engraved plates are in the original black and white (most copies were colored). Spaendonck's work is exceedingly rare, and the man himself is not that well known despite his great artistic talent. However, he was a notable influence on and supporter of Redoute, the great illustrator of roses whose prints bring great prices today. $58,500.

John Lawson provided one of the earliest looks at the Carolinas in The History of Carolina… This is a first edition, second issue, published in 1714 (five years after the first issue). Lawson sailed from England to Charleston in 1700, and then proceeded on a 600-mile inland journey through what was mainly wilderness. He wasn't the first to travel the interior regions, but he provided the earliest detailed account, paying particular note of its natural history and Indian tribes. He became a surveyor in what is now North Carolina and helped found some of its earliest settlements. On one of his surveying missions in 1711, Lawson ran into problems with the Tuscarora Indians and was killed. $57,500.