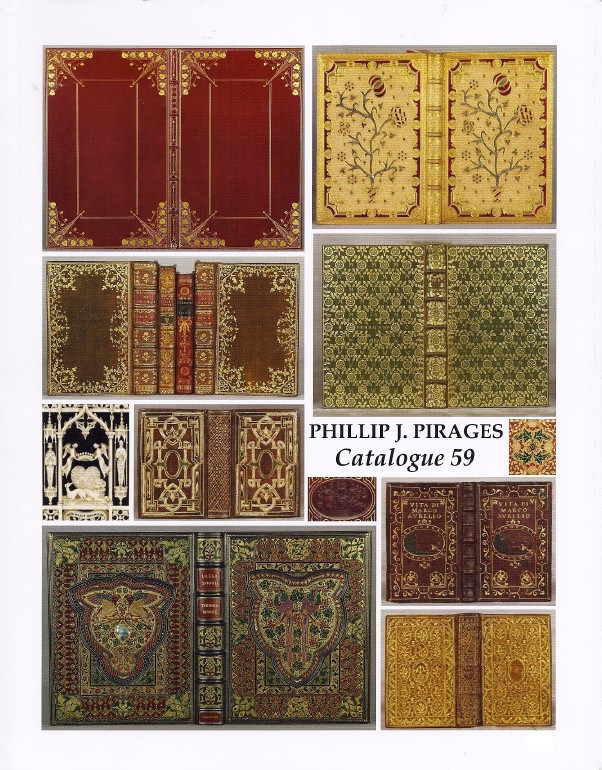 Catalogue 59 from Phillip J. Pirages Fine Books and Manuscripts is entitled Historically Interesting and Decorative Bindings, Private Press Books, & other Special Printings. As the title suggests, these are books that also fit the category of works of art. Some are important books in their own right; others less significant works dressed up in elegant clothing. They range all the way from deluxe editions to bejeweled bindings of such elegance and extravagance it is hard to imagine that they house mere books. Most of the items offered are British in origin, though Pirages is located in Oregon. Well, Oregon was once a British possession, at least in the minds of the British. Here are a few samples from this catalogue which itself exudes elegance just as do the items described and pictured.

Item 111 is an 1817 first edition of Lalla Rookh:  An Oriental Romance, by Thomas Moore. This was a very popular romance in its day, the story of a young lady who travels to meet the prince to whom she has become engaged, falls in love with a poet along the way, and then discovers the poet is really her prince. Its popularity has not stood the test of time as well as, say, works by Shakespeare. So why is this book priced at $65,000? It's all in the ornamentation. It comes in what Pirages describes as "among the most wonderful modern bindings we have ever seen." Most notable are the 226 jewels embedded in the binding. Among the jewels are two rubies for eyes of a Bird of Paradise, 19 turquoises, nine bands of mother-of-pearl, 20 each blue chalcedonies and garnets, two amethysts, three sapphires, and so on. The binding is the work of Sangorski and Sutcliffe from the early 20th century.

Item 21 features a binding made for royalty. The book is Chorographia Britanniae, a 1742 atlas of English counties bound by John Brindley for Frederick Louis, the Prince of Wales. Brindley operated a bindery and bookshop in London, where he bound books for Frederick and his mother, Queen Caroline, as well as Isaac Newton and others. Frederick, on the other hand, never needed a real job, but was noted as a patron of the arts. He apparently detested his father, King George II, a feeling that was certainly mutual. It was of no great sorrow to his father that Frederick, though the first born, never became King. Dad outlived him, perhaps inspired to do so by his distaste for his son. However, Frederick's son, like his father, would be King, in this case George III, hated by revolutionary Americans as Frederick and George II despised each other. His great-granddaughter was one of England's most notable of monarchs, Queen Victoria. $9,500.

That note about Queen Victoria provides a segue to item 348. Private Lives of Kaiser William II and his Consort, supposedly written by one of his Empress' ladies in waiting and published in 1909. Private no more! This is a tell-all book that may not be entirely accurate, but does give a good look at German royalty at the time. Kaiser Bill does not come off well, being shown as "a vulgar, narcissistic philanderer" who flaunted his mistresses in front of his wife to prove his domestic independence. Kaiser William was the grandson of the aforementioned Queen Victoria, but would become the most hated man in England as he led his nation to war against grandmother's homeland, the First World War. $450.