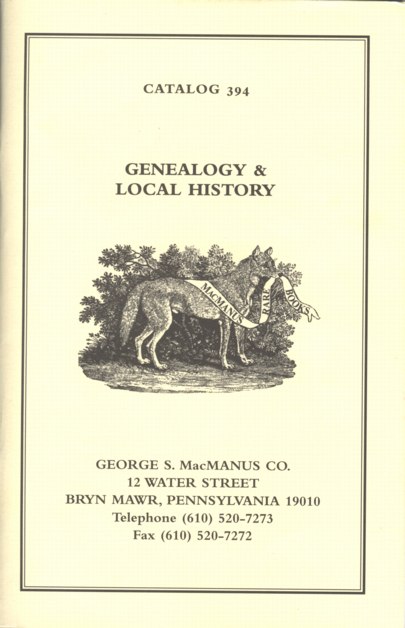 The George S. MacManus Company, of Bryn Mawr, Pennsylvania, has issued its Catalogue 394, "Genealogy & Local History." This is a collection of almost 1,300 very targeted publications. Catalogues about genealogy and local history are among the more difficult to review as their titles are generally of niche appeal. The Dings Family in America is likely to be of great interest to the Dings, but perhaps not to many others. The Reminiscences of New Hampton, New Hampshire, will be of interest to people from New Hampton and those with a thing for alliteration, but how about for the other five billion people in the world? So which titles do you pick out for mention? The answer is all you can do is mention a few random samples, but remind readers that there are many, many more families and communities covered by these niche and mostly obscure books, and if you collect your family or town, you need to check out this catalogue to see if they are here. Here's one hint: while areas from all over the United States are included, the greatest concentration of books is from the Northeast, Midwest, and Middle Atlantic states.

We will start with item #1 from this catalogue as this is a family we all know: A Genealogical History of Henry Adams, of Braintree, Mass., and His Descendents by Andrew Adams. Not a lot is known about Henry. He came to America around 1636 with his wife, approximately eight sons (exact number not certain) and a daughter. It's not clear why he left England, but he was already in his 50s at the time, not a young age in 1636. He was a farmer, did not make any particular mark on the new country, and lived here no more than ten years, as he died in 1646. However, his descendants a few generations later would become enormously influential. Counted among those descendants are John Adams, the second president, John Quincy Adams, the sixth president, and Samuel Adams, a Revolutionary patriot (he's the one the beer is named after). This is a 1984 reprint of the 1898 original. Priced at $60.

For those interested in searching local histories, here's an excellent starting point. The book is United States Local Histories in the Library of Congress by Marion Kaminkow. This is a five-volume set published in 1975, which will enable you to learn much about what has been written on the various communities across America. Item 392. $300.

For those interested in obtaining printed copies of some of the works available in the Americana Exchange Database, MacManus offers a copy of the five-volume The Bibliographer's Manual of American History, Containing an Account of All State, Territory, Town & Country Histories Relating to the United States...from Thomas Bradford. Published between 1907 and 1910, this set remains one of the most important Americana references available today. It even contained prices, and while those are obviously dated today, you can adjust them for a hundred years of inflation to estimate which are of greatest value now. Item 239. $225.