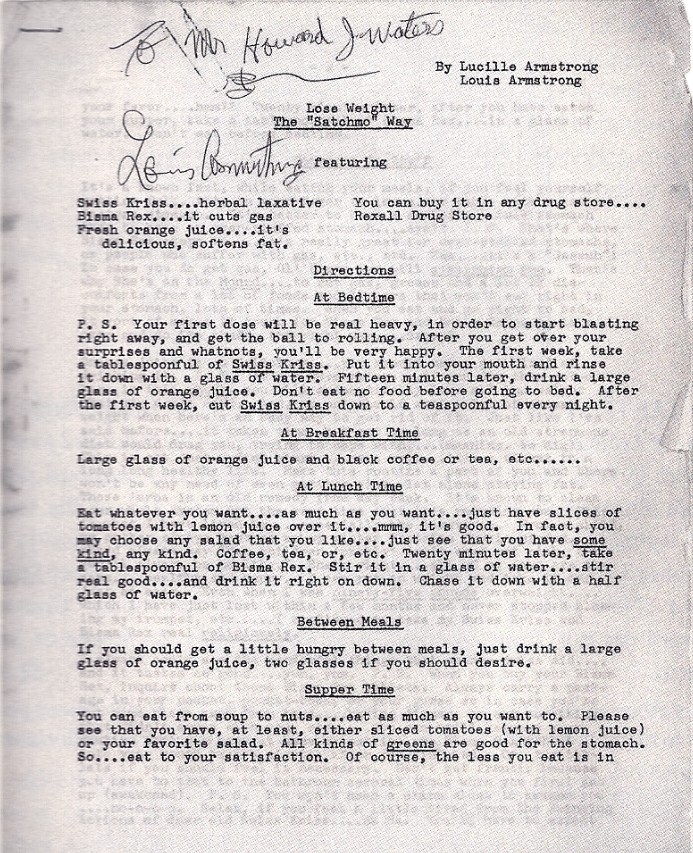 Item 52 is a letter from Queen Elizabeth II, shortly after he coronation in 1953. It is both proper and flowery, full of thanks to Dominican Republic President Hector Trujillo. Trujillo had been a Major General in the Army, then General of the Army, a cabinet Secretary and was a wealthy man when he became President in 1952. However, in reality, Trujillo rose to power the same way as Elizabeth - family connections. His brother, Rafael Trujillo, was dictator of the country from 1930 until his assassination in 1961, after which Hector and other relatives fled the country. Hector avoided the assassin's bullet and lived to the age of 94, perhaps because Queen Elizabeth pointed out in her letter, "And so we commend You to the protection of the Almighty." $3,000.

Louis Armstrong is famous for his trumpet playing, gravelly voice, and as being, perhaps, the greatest jazz musician ever. Not so well known is that Armstrong, familiarly known as "Satchmo," created his own diet. The great musician had weight problems and sought a solution that did require giving up one of his favorite pastimes - eating. So he created a diet, which is described in this typed, signed manuscript headed Lose Weight the "Satchmo" Way. Armstrong convinced himself that if you ate a few healthy things and took laxatives, you could then eat whatever you want. If only it were so easy. Armstrong's diet requires drinking lots of orange juice and eating salads. Add to that tomatoes with lemon juice. As long as you have those, for lunch you may "Eat whatever you want….as much as you want," and for supper, "You can eat from soup to nuts….eat as much as you want to." As for the laxative, you first start with a heavy dose "to start blasting right away," and gradually reduce this to normal nightly amounts. Armstrong heavily recommended the herbal laxative Swiss Kress, and while Satchmo has been gone four decades, this product is still around. You may want to try his advice… or maybe not. For details on this unique diet, order item #5. $1,500.