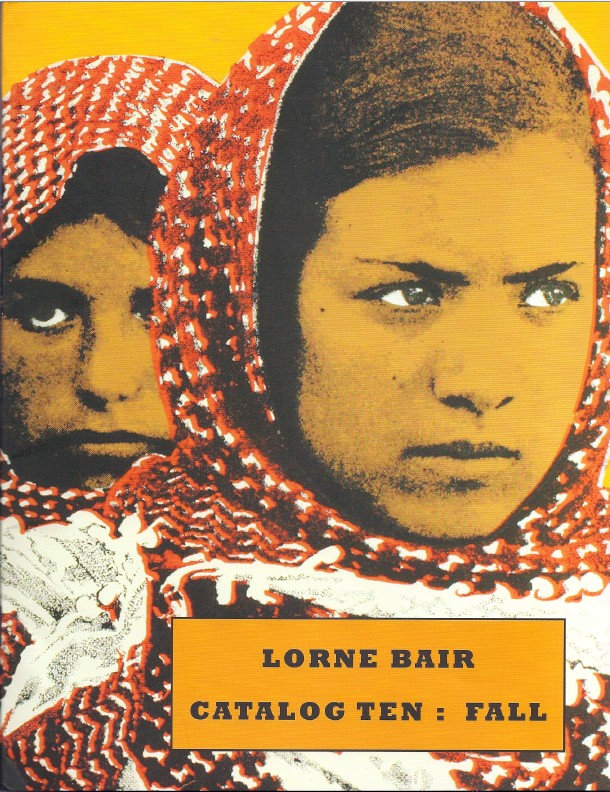 Lorne Bair Rare Books has released Catalogue Ten, a collection that will warm the hearts of those well to the political left, a few to the far right, and almost no one in the middle. This is not a catalogue for moderates, for the why-can't-we-all-get-along crowd. These are works from people with strong opinions, those fighting for the cause no matter how long the odds. While most of these writers come from the left, battling for unions, civil rights and similar causes, Bair includes a few from the other end of the spectrum, such as the biography of George Lincoln Rockwell, founder of the American Nazi party. Fair and balanced. Though the political left never truly came to power, it was at one time much stronger than it is today, and it pushed the center to accept much of what it once resisted, unions for workers, civil rights for minorities, equal rights for women, freedom from as well as of religion, assistance for the poor. While some of the extreme statements may seem amusing today, they did force a reluctant political establishment to treat those with less influence more fairly, if only as a means to prevent them from coming to power.

One of the greatest causes of the left came in the 1920s, the trial of Ferdinando Sacco and Bartolomeo Vanzetti. Sacco and Vanzetti were accused, tried, and convicted of murder during a Massachusetts robbery in 1920. In 1927, they were executed for the crime. Their guilt or innocence is debated to this day, though it would certainly be a stretch to say they were guilty beyond a reasonable doubt, or that their trial was fair. Many believed they were convicted more for their anarchistic views and Italian heritage than from evidence of their guilt. Their trial and execution created international outrage and drew protests from many leading American figures who believed they had been railroaded. For those who would like to reach their own conclusions about the fairness of their trial, item 38 is the complete official transcript of the trial and later court proceedings, six volumes in all, published in 1928-29. Priced at $750.

Over the years, many whites have played on racial fears by blaming blacks for their own crimes or bad behavior. From the Scottsboro Boys to more recent cases of family killings being blamed on supposed black intruders, the hope is that juror prejudices will make them more likely to believe that someone else did it if that someone else is black. However, here is a play on that practice of which I was previously unaware. Item 9 is Burnt Cork and Crime:  Stories Summarized from Press Reports. This short piece was published by the Committee on Interracial Cooperation, circa 1935. It summarizes national news stories where white criminals perpetrated their crimes while wearing blackface. The practice was evidently most common in the South where existing prejudices made it easy to assume a black man perpetrated the crime regardless of whether one actually did so. $150.

Item 69 is a copy of Brann's Annual for 1897, a collection of William Cowper Brann's writings for his Waco, Texas, newspaper, The Iconoclast. It was his last annual, as Brann was assassinated the following year. It would be hard to call Brann far left or far right; he was just far out. Generally considered a brilliant newspaperman and writer, his outrageous opinions would have been well suited for today's cable TV and talk radio. Brann was born in Illinois, son of a minister, but he made his mark in Texas. He worked at several newspapers, from St. Louis to all over Texas. He never lasted long. He launched his own newspaper in Austin, The Iconoclast, in 1892. It was unsuccessful, so he sold it to William Porter, who would later be better known by his penname - O. Henry (it failed for him too). However, a few years later, Brann reopened his paper in Waco, and this time it was a great success. At his death, its circulation was almost 100,000, amazing for such a publication in the very conservative hometown of the Baptist university, Baylor. Brann skewered religions, the Baptists and Baylor in particular, and attacked wealthy eastern industrialists, particularly those who married European royalty. One of his noted comments was directed at the Baptists:  "I have nothing against the Baptists. I just believe they were not held under long enough." However, if all this sounds very liberal, Brann also wrote some of the most vitriolic, incendiary stereotypes of American blacks, such as would have embarrassed even many of his southern contemporaries. Brann was shot down on the streets of Waco in 1898 by an enraged supporter of Baylor University (though shot in the back, he managed to spin around and fire six shots at his assailant, both succumbing the following day from their wounds). The Iconoclast did not survive much longer once its voice was stilled. Today, a collection of material on Brann may be found at… Baylor University! $200.