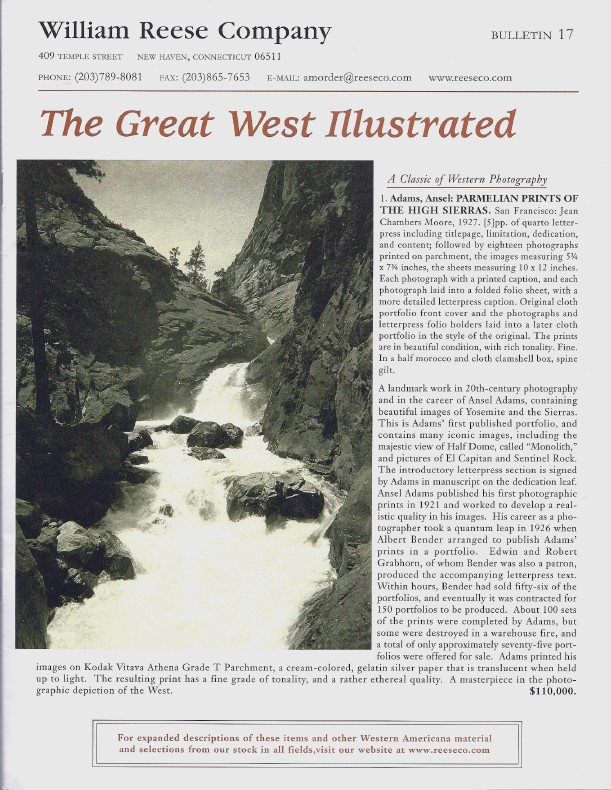 The William Reese Company has issued Bulletin 17. The Great West Illustrated. For two centuries, since the journey of Lewis and Clark, this land of the wild frontier has fascinated Americans, and peoples across the oceans, like no other. Europeans first settled the eastern part of North America two centuries earlier, but we never see a catalogue of the Great East, the American East, or the Old East. The West lives in our imaginations like no other land - unknown, untamed, a land without boundaries. In this catalogue, Reese offers us illustrations or illustrated works of the West when it was still young and barely explored. Some of these images are realistic, others fanciful, but they all fit well with our images and imaginations of the Old West.

Item 21 brings us to the time when the West really captured America's interest, when President Jefferson sent Captains Lewis and Clark out to explore the far reaches of the new territory known as Louisiana, recently purchased from France. They left in 1804 and returned in 1806, but it was not until six years later that their official account was finally released to the public. Meanwhile, one of their company, Sergeant Patrick Gass, released his own account, Journal of the Voyages and Travels of a Corps of Discovery, under the Command of Capt. Lewis and Capt. Clarke [sic]… Gass originally released his book the year after their return, in 1807. Here offered is the third American edition from 1811, and unlike the first, this edition is illustrated. These drawings were based on observations by one of the party's members, and as such are the only extant illustrations from the journey. It provides images of Indians encountered, hostile and friendly, plus the scenery observed. Priced at $7,500.

What you see on the cover of this catalogue is an image from Ansel Adams' first portfolio of photographs, Parmelian Prints of the High Sierras, published in 1927. These photographs were taken at Yosemite and the Sierras. Adams had published photographic prints as early as 1921, but it was this portfolio that began to gain for Adams the recognition that would one day lead him to be considered America's foremost western photographer. Adams contracted for 150 portfolios to be produced, but more likely around 100 were completed, and perhaps 75 survived as several were lost in a fire. $110,000.

Next we have a set of western artwork of a very different sort. Item 30 is a collection of 71 original watercolors created as covers for the English series Buffalo Bill Novels. As noted earlier, the appeal of the American West is not limited to Americans. This magazine was published for boys in England from 1918-1932. Presumably, this must have been commissioned by his estate, as William Cody died in 1917. Not all of the stories were about Bill, but many of them were, and his image graces many of these paintings. This is a young looking Bill, from the days when he actually did roam the West, rather than the many more years he traveled other territory with his Wild West show. Cody certainly painted an exaggerated picture of the Old West, and these stories were similar exaggerations if not outright fabrications, but for a few years, Buffalo Bill actually did lead a life at least somewhat resembling the dramatic portrayals he spent most of his life displaying to Easterners and Europeans. $55,000.