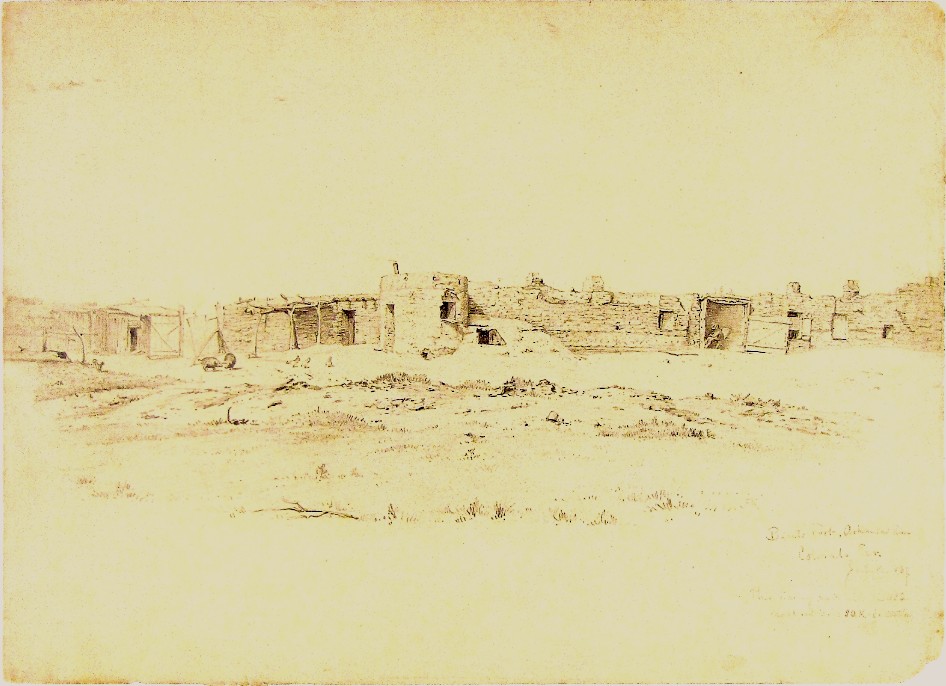 
Item 4 is a previously unknown drawing of Bent's Fort in its last days, circa 1870. The fort was built as a trading post in the 1830s by the Bent Brothers, primarily to trade with the Southern Cheyenne and Arapahoe Indians, as well as fur trappers. It was located in southeastern Colorado along the Santa Fe Trail, the only permanent stop between Missouri and the Mexican settlements in New Mexico. It also served as a stopping point for travelers along the trail, a place where John C. Fremont took on supplies when he began his California explorations, and a staging area for American troops during the Mexican War. However, by 1849, the Bents had abandoned the fort and moved to a new location. It continued to be used, but was allowed to deteriorate. By the late 1860s, it was tended by a lone caretaker as part of a mail route, the structures now a ramshackle collection of deteriorating buildings. It was at this point that the artist sketched the fort, or what remained, possibly the last live image of Bent's Fort. The initials JFK appear in the corner of the image, which may be those of Hudson River School painter John Frederick Kensett, who traveled to Colorado in 1870, but Reese makes clear that no definitive attribution can be made for this drawing. $27,500.

Item 31 is one of those inventions that looks better on paper than in the field. It is a copy of a privately circulated prospectus for the Overland Traction Engine Company. Transportation by Steam from the Missouri River to the Rocky Mountains, published in 1865. While others were trying to build a railroad across the country, Overland was developing the first SUV. This was a massive steam engine that could haul passengers and cargo across the Great Plains on the rough trails, such as they were, without need for rails. The massive 54-ton device would provide the enormous power needed to haul the heavy loads over rough trails. What the inventors failed to account for was the fact these "roads" were not paved. The 54-tons quickly became bogged down in the mud on the first trial run. The plans were soon abandoned. $3,500.