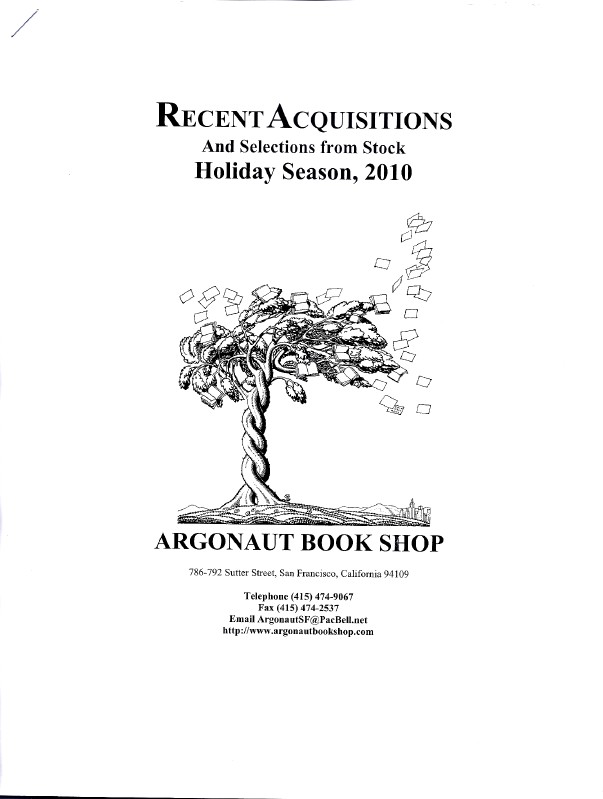 The latest catalogue from the Argonaut Book Shop is titled Recent Acquisitions and Selections from Stock. Holiday Season, 2010. That doesn't exactly tell us very much about what to expect inside. We will provide a little help. It is primarily filled with books relating to the western states of America, and early travel to and exploration of that region. There are some exceptions, but that's a decent short description of what you will find inside. Let's take a look.

Most people undoubtedly are familiar with the first great exploration into the Louisiana Territory by Lewis and Clark, and many are familiar with the second, by Zebulon Pike. The third is not so well remembered. Item 16 is Edwin James' account of that journey, published in 1823: Account of an Expedition from Pittsburgh to the Rocky Mountains, Performed in the Years 1819 and 20… Under the Command of Major Stephen H. Long. Long was sent up the Missouri River by steamboat to explore the Yellowstone, but after stopping to winter over, President Monroe sent him a change of directions. Instead, he headed west of the Missouri, across the Great Plains to the Rocky Mountains. He attempted to reach the source of the Red River but did not succeed. Nonetheless, Long's expedition came back with much in the way of geographic and scientific data, as well as information about the area Indian tribes. However, Long made one major miscalculation, though it was not unreasonable at the time. He labeled the territory ranging from Oklahoma to Kansas, Nebraska, and eastern Colorado the "Great Desert," and concluded it was unsuitable for settlement. It was better suited to be a buffer between America and the Spanish colonies to the south. Certainly the territory was sparse by typical American standards of the day - no trees for wood and dry soil not easily employed for farming. It was also completely isolated from the rest of America in terms of transportation and communication. Nevertheless, within a few decades, immigrants would settle the land and make it part of America's farm belt. Priced at $2,500.

Forty-five years later, Samuel Bowles would take his party even farther west, though by this time there were trails to follow. His account is presented in item 36: Across the Continent: A Summer's Journey to the Rocky Mountains, the Mormons, and the Pacific States, with Speaker Colfax. Speaker Colfax was Schuyler Colfax, Speaker of the House of Representatives at the time and the first vice-president under President Grant. Celebrating the end of the Civil War, Speaker Colfax and the others set out on May 21, 1865, from Kansas, crossing the Rockies, passing through Salt Lake, crossed the empty spaces of Nevada, and eventually made their way to San Francisco. From there it was up the coast overland to British Columbia, back to San Francisco by steamer, on to Yosemite, and all the way back to New York by the end of September. Author Bowles was the Editor of the Springfield (Massachusetts) Republican and the book consists of his letters back to that newspaper. $275.

It was a very different San Francisco than the one seen by Bowles and Colfax that hosted the Panama Pacific International Exposition in 1915. The fair was designed to celebrate the opening of the Panama Canal, but San Francisco was also intent on showing its recovery from the devastating earthquake less than 10 years earlier. Some of the latest technology, such as coast-to-coast telephone communications, was on display. Item 196 is one of 35 specially bound copies of The Legacy of the Expedition… prepared for important people, this one for C.S. Stanton, a Director of the Exposition. Printing was by the notable San Francisco fine printer John Henry Nash. The publication includes 17 large photographs of the exposition plus one 8" x 40" panorama. The panorama was taken on "Taft Day," and features the former President and other dignitaries in front of a big audience. A panorama photograph was understandable for Taft as he was a very large man. $125.

Item 4 is a copy of the first book with Ansel Adams' photographs, a follow-up to his Parmelian Prints portfolio. The work is Taos Pueblo, and it features not only Adams' photographs by the words of noted Southwestern writer Mary Hunter Austin. The book was printed by the Grabhorn Press in 1930, and is signed by both Adams and Austin. It is #29 of a limited edition of 108 copies. It contains 12 photographs of the Taos Indian pueblo (sort of an ancient apartment complex) and sold for the huge Depression-era price of $75 (it sold out). Adams was only 28 years old at the time, but his reputation was growing rapidly. $40,000.