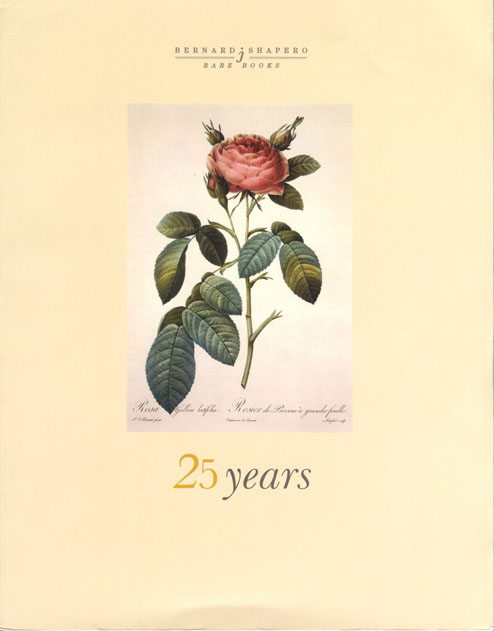 This season marks the 25th year of bookselling for Bernard Shapero, and he celebrates that anniversary with a catalogue as gorgeous as many of the books listed therein. That is no small accomplishment as most of the items offered are illustrated books from the 18th and 19th century and the artistry is at times phenomenal. Shapero begins with a brief recounting of his career, from a 16-year-old beginner to proprietor of Bernard Shapero Rare Books, one of London's major booksellers and one which today possesses a worldwide reputation. The catalogue is called simply "25 years."

The major fields covered are travels and views of far off lands (far off from Europe, that is), and botanical and zoological books. These are topics well-suited for spectacular illustration, and these books do not let you down.

Item 92 is The Holy Land... by David Roberts. This is the earliest edition of this work, published in three volumes from 1842-1845. Roberts visited the Near East in the late 1830s and produced a vast number of drawings of sites in the biblical lands along with adjacent Syria and Jordan. Shapero notes that "many people consider this work to contain the finest prints of the area that have ever been produced." That is no exaggeration. Priced at £55,000 (all items are priced in British pounds. We will provide an approximate U.S. dollar conversion as well). US $98,571.