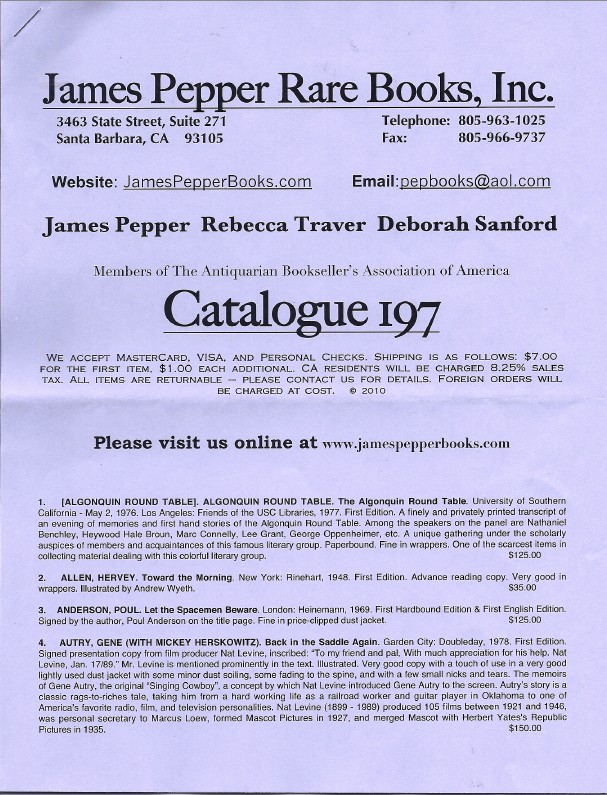 James Pepper Rare Books has issued Catalogue 197, with the focus on film and actors, along with some literature and mystery, and items related to authors. These include books, filmscripts, photographs, and other items, many of them autographed. Here are some samples.

We start with a piece that will appeal to any fan of the Great Garbo. It is a 1927 filmscript for Dorothy Farnum's The Divine Woman. It is a mimeographed screenplay of the story of a young girl who must choose between a young man and an older, wealthy producer. The silent film featured Greta Garbo in the lead role. If you want to know her choice, you will need a copy of the script, as the film itself is lost. It is the only Garbo film for which there are no copies known to be extant. Only a 9-minute reel, the script, and some publicity material survives. Item 72. $1,350.

Next is an item that doesn't fit Pepper's usual fields of film, literature and mystery. Well, perhaps mystery in a sense, but not the type of typical mystery books. It is Dr. Nikola Tesla: Complete Patents. Compiled by John T. Ratzlaff. Volume 1 (one and only). It was published in 1983. Tesla was a genius, but an eccentric one, which limited a reputation that should have been up there with Edison's. He is most known for developing alternating current, which allowed for the efficient transmission of electricity over wide distances. However, he had many futuristic ideas, such as obtaining energy from outer space, ideas no longer so farfetched today. This book presents the patents Tesla received between March 30, 1885, and October 4, 1927. Despite his great inventive genius, the eccentric Tesla died in a small hotel room, broke and alone, in 1943. Item 128. $185.

It seems every time I come across a signed Lewis Carroll (Charles Lutwidge Dodgson) item it is inscribed to another one of his many lady friends…young lady friends, if not very young lady friends. This one was just young, a 16-year-old logic student of Carroll's. Her name was Edith C. Lucy, and she later helped him sell off some spoiled copies of his books. Item 28 is a copy of Alice's Adventures in Wonderland, an 8th edition from 1891, with an inscription to Lucy from "the Author," which he generally used to overcome the Dodgson/Carroll issue. $8,500.

From great works of art we go to…??? Item 75 is a script for the June 18, 1965, episode of Gilligan's Island. This one is entitled Gilligan's Mother-in-Law. I don't remember it. This was the personal copy of Jim Backus, who portrayed the millionaire in the series. Backus was an outstanding comic actor, despite his appearing in this show. He also supplied the distinctive voice of Mr. Magoo. $1,500.

Item 82 "celebrates" a most unhappy event: Jaws of Honda: 75th Anniversary of the Honda Tragedy. This is not about an automobile accident, but one about a ship accident. Actually, it's about seven ships' accidents, America's worst peacetime naval disaster. It was a foggy night in 1923 when 14 Navy ships headed around Port Arguello in California on their way home to San Diego. The lead ship in the contingent ran aground at Honda Point, and in the foggy dark, six other destroyers joined it on the rocks. A total of 23 people from two of the ships died in the accident. This 75th anniversary account was published, naturally, in 1998. $45.