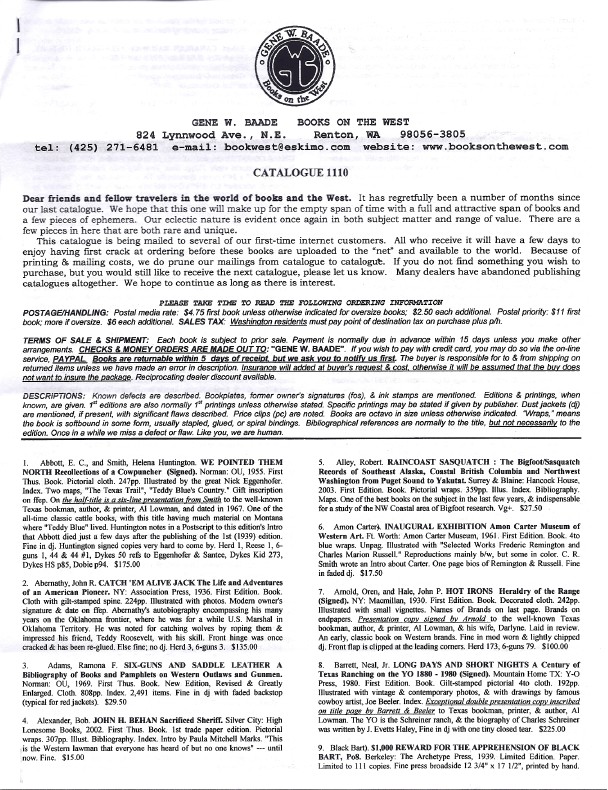 From the West by Gene W. Baade.

From Gene W. Baade we have received his Catalogue 1110 of Books on the West. For those wondering about that number, Baade publishes a lot catalogues, but not that many. The numbering system is based on dates, not chronologically assigned. However, the books are based on dates. Some are old, some recent, but they almost all pertain to that period when the West was still young, the 19th or early 20th century. Here are some items from Baade's latest trip back in time.

Here is an autobiography by one of those remarkable western characters from the turn of the century, John R. "Jack" Abernathy: Catch 'Em Alive Jack. The Life and Adventures of an American Pioneer, published in 1936. Abernathy was noted for catching wolves - alive, as the title suggests. He would catch 'em barehanded, wiring their jaws tight so they couldn't bite. That's quite a feet, not one we would recommend trying at home. It was such a feat that President Theodore Roosevelt, quite an outdoorsman himself, had to meet Jack and participate in one of his wolf hunts. Roosevelt traveled to Oklahoma to hunt with Abernathy in 1905, and while he was not able to capture any wolves barehanded, he was one of the few who could keep up in the saddle with Jack. The President was so impressed he appointed Abernathy a U.S. Marshal. By 1936, Jack wouldn't have been catching too many wolves with his hands any longer, but they were still fast enough to write a book. Item 2. Priced at $135.

We usually think of western criminals as gunfighters, shooting their way out of banks they have robbed. This was not the case with Jefferson "Soapy" Smith. Smith was a confidence man, setting up various ways of defrauding trusting but naïve citizens of their money. He frequently used variations on the three-card monte scheme. The one from which he derived his nickname involved tying bills to bars of soap, covering them with paper, then shuffling them around and offering the bars for sale. Smith was fast enough to exchange the ones with money for others. Meanwhile, he would have a few shills in the audience who would buy the good ones, and display their "winnings" to the crowd. Onlookers would be suckered in to buy his soap bars, but naturally, they would never be ones containing money. Smith rose to be a leader in the world of crime, expanding to illegal gambling, prostitution and the like in Denver. When he was driven away, he set up shop in the gold rush mining town of Creede, Colorado, and eventually another gold rush town, Skagway, Alaska, in the late 1890s. However, it was there that Soapy became involved in a confrontation that quickly got out of hand, and he was shot and killed. Smith's story is recounted in Soapy Smith. King of the Frontier Con Men, by Frank G. Robertson, published in 1961. Item 128. $19.50.

Another man who became a legend of the Old West for the wrong reasons was Alfred Packer. In the middle of the winter of 1873, Packer and 20 other men were situated in Montrose, Colorado, looking to make the trek to Gunnison. There is a nice highway between those two cities today, but even so, you wouldn't want to chance the trip during bad winter weather. It was foolhardy to do so in 1873. Nonetheless, Packer and four others left Montrose on February 9. Months later, Packer arrived; the others did not. According to Packer, they became lost and snowbound. Packer went out on a scouting mission, only to return to find one of the men, Shannon Bell, cooking the others. He then shot Bell. The law did not believe Packer's story, believing he was the killer and cannibal. Packer was sentenced to 40 years, but was later paroled. It remains a question whether Packer was the instigator, or returned to find another's cannibalism. Item 54 is The Case of Alfred Packer. The Man-Eater. An Unsolved Mystery of the West, by Paul H. Gantt, published in 1952. $45.

Georgia O'Keeffe was born in 1887 and grew up in Wisconsin, an unexpected start for one of America's most noted western artists. Her art was first exhibited in New York in the teens by famed photographer Alfred Steiglitz, who would later be her husband. By the 1920s, O'Keeffe had become one of America's most successful painters. However, her western art would not come until after a New Mexico visit, which led to her spending much time there after 1930, eventually settling in the state. Over the next couple of decades, she became noted for her western art. However, this book has little to do with the period of her greatest work. Item 113 is Miss O'Keeffe, by Christine Patten and Alvaro Cardona-Hine, published in 1992. Miss Patten, an artist herself, came to work for Miss O'Keeffe as a caretaker in 1983. The latter was then 96 years old. The book provides a look at the artist in her very old age, needing much assistance, half-blind and barely able to paint, and with her affairs run by Juan Hamilton, another artist she had hired, who some people felt took advantage of the old lady. This was a difficult time for O'Keeffe, who loved her independence, but now had to rely on hired caretakers to survive. The fact that she was worth tens of millions of dollars with no obvious heirs naturally complicated matters. Miss Patten left after 18 months, but Miss O'Keefe lived to be 99. $7.50.