Chess Letters from White to Gamage, Offered by The Book Collector 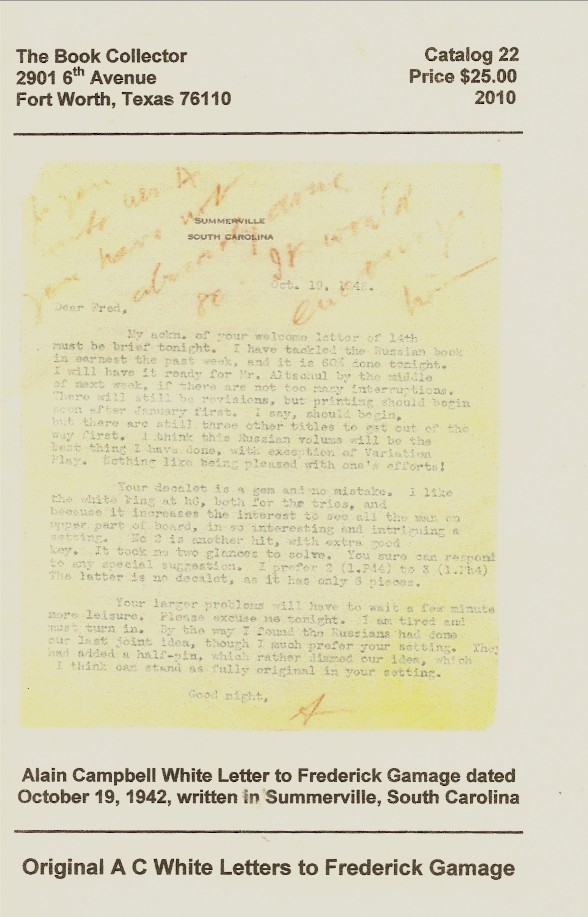 Chess Letters from White to Gamage, Offered by The Book Collector

Once in a very rare while, we receive a catalogue that is totally out of the ordinary, and virtually beyond the ability of an amateur to describe. This will not be a typical review. The catalogue is Alain Campbell White Letters to Frederick Gamage, published by The Book Collector of Fort Worth, Texas. This catalogue contains but one item. Well, that's not entirely correct. There are almost 400 items. However, there is only one lot. E. pluribus unum. You can buy it all or nothing; there is no in between. The subject of these letters is the game of chess. This collection will be of interest to those who collect or are experts in chess, no one else. The reality is only those expert in this field will be able to understand the intricacies of chess strategy. As one whose skills were limited to, at best, holding my own against my 8-year-old children, I am not a member of this class. Anyone needing my assistance to explain this material is not sufficiently knowledgeable about chess to have any interest in purchasing this material anyway. Those who do understand chess at this level are not likely to suffer fools lightly, so I will refrain from making a fool of myself.

Alain Campbell White was born in 1880 in Litchfield, Connecticut. He evidently learned chess at a very early age. White published his first chess problems and strategies at the age of 11, a sure sign of an extraordinary mind. While his chess skills were certainly unusual, White is perhaps best known in his native Connecticut as a conservationist. His family was wealthy, and White applied some of that wealth to buying up land for parks. He created the White Memorial Foundation and Conservation Center, named for his parents, and served as head of the state park system in the 1920s. He is today considered the founder of the Connecticut state park system. Alain White died in 1951.

Frederick Gamage was born in Westborough, Massachusetts, in 1881, and must have been similarly brilliant as Mr. White. He began composing problems in 1901 and was very active in the first part of the 20th century. However, he withdrew from chess in 1914. He returned to composing in the 1930s and it was at this time that he began his extensive correspondence with White. There is a book about Gamage's life, Frederick Gamage, by Mike Prcic, a copy of which is included with this collection. Gamage passed on in 1956.

The almost 400 letters offered run from 1935-1944. Starting more formally in the beginning ("Dear Mr. Gamage"), the two obviously became good friends as times went by ("Dear Fred"). Along with the letters and Prcic's book there is included a copy of White's book, Frederick Gamage: an Artist in Chess Problems, published in 1941.