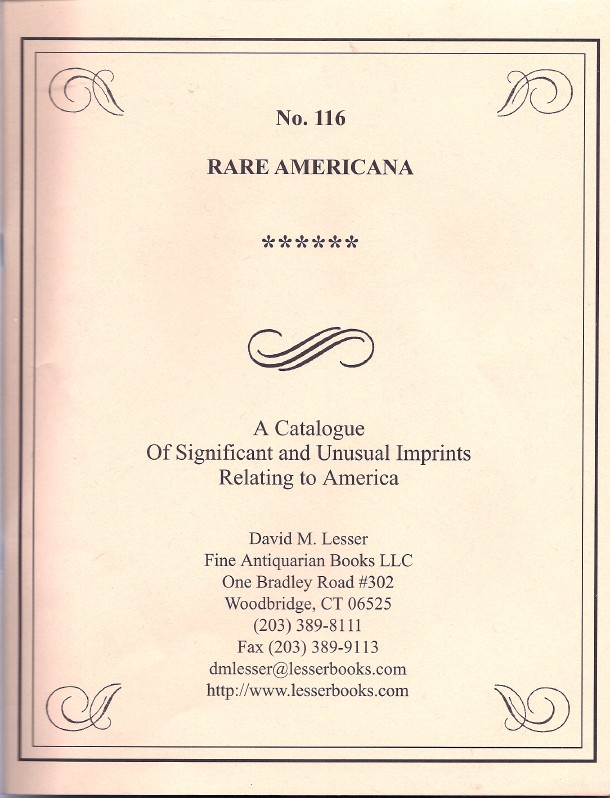 David M. Lesser Fine Antiquarian Books is back with a new catalogue of Rare Americana, number 116 for the Woodbridge, Connecticut, bookseller. Lesser specializes in American pamphlets, an important means of communicating ideas in the days long before Facebook and Twitter. They even afforded enough space to convey serious, complex thoughts, though adequate space does not always translate to intelligent ideas. Nevertheless, these pamphlets will provide a healthy insight into American thinking in the period from one to two-and-one half centuries ago. Here are a few examples.

Samuel F. B. Morse was first a notable painter, and then one of the great inventors of the 19th century. He is most remembered for the invention of the telegraph, and the Morse Code that was used to send messages. Morse may also have been one of those combinations of genius and craziness, for his political views were filled with conspiracy theories and plain old ugliness. Morse ran for Mayor of New York in 1836, thankfully receiving only a small number of votes, on an anti-immigrant, anti-Catholic platform. At this time, he even wrote a book about "foreign conspiracies" against America, with the Irish and the Catholic Church prime targets. In time, though being a northerner, Morse would become a vehement supporter of slavery. By the time of the Civil War, Morse was also seeing conspiracies on the part of the British, whom he concluded through some twisted logic had caused America's Civil War. He wrote about his theory in 1862 in item 120, The Present Attempt to Dissolve the American Union, a British Aristocratic Plot. Morse wanted to blame the British for the evil of creating slavery, while also establishing that slavery was good and that their later actions to abolish it were also evil, this leading to the war between South and North in America. Morse gets around this seeming conflict by saying that it was the slave trade which was evil, because of the terrible conditions under which the British transported the slaves, but that slavery itself was okay. Morse had the semi-good sense not to put his name on the book as author, attributing it only to "B," but the vouching for the remarks by Morse's brother, newspaper editor Sidney Morse, kind of gave things away. Priced at $150.

Item 20 is a legal opinion in one of numerous lawsuits by what may have been the most litigious woman ever: Statement of Facts in Relation to the Dismissal of Mrs. Martha Bradstreet's Suits. This decision came from the Federal District Court of Northern New York in 1831. She lost. She appealed all the way to the Supreme Court, and lost again. Mrs. Bradstreet was the step-granddaughter of a hero of the French and Indian War, who had been granted a large tract of land near today's Utica, New York. She also inherited claims from several other relatives. However, by the time she arrived in America, most of those lands had been settled by others, and legal claims were at best murky. So began a lifetime of litigation, countless suits against numerous purchasers of land Ms. Bradstreet believed was hers. The lack of success in her claims never deterred Martha, who fought for the rest of her life. At one point she was represented by Aaron Burr, but her lawsuits were so numerous she had to handle most herself. As such, she is seen as something of a pioneer in women's rights, though I'm sure those whose land she tried to seize had other words for her. At one point, she even attempted to have Congress impeach a judge who consistently ruled against her, but was unsuccessful in this endeavor as well. $250.

Here is an item that might surprise some of today's Republicans who believe that English exclusively should be the language of America. Item 60 is Das Leben Des Obersten Fremont, published in 1856. It is a pamphlet supporting the candidacy of the first Republican presidential nominee, John C. Fremont, and it is written in German. Many Germans immigrated to America during the 1840s and 50s, and the Republicans wanted to reach those voters in the language they best understood. This came at the height of the Know-Nothing Party, an anti-immigrant (which often meant anti-German) party that made a serious run at the presidency with former President Millard Fillmore as their standard-bearer. Meanwhile, the Democrats were primarily concerned with keeping the South happy in an attempt to avoid secession. This left the Republicans room to appeal to the concerns of recent immigrants. Fremont lost anyway, but by the next election, the Republicans would take power. Item 60. $350.

Item 17 is a catalogue for a major industry of its time (1879 or 1880), but one with a limited future. It is the Boston Buckboard Company's Catalogue. Despite the name, this was a New Haven company, but with financial backing from Boston. It was formed at this time to produce higher end carriages, including the "Doctor's Wagon" and "Family Pride." The company fell into difficulties a few years later, but would reorganize itself in 1885, and was still going at the turn of the century. We have been unable to follow its history after this, but one can guess that it was eventually done in by that new-fangled contraption, the automobile. $350.