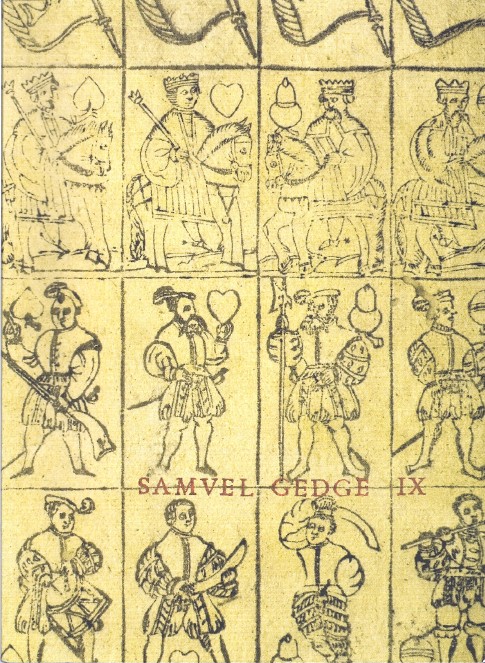 Samuel Gedge Ltd. Rare Books has issued their Catalogue IX. Those Roman numerals provide a good indication of the type of material to be found here - very old. Maybe not quite from Roman times, but most items here run to around two centuries and longer ago. It is hard to otherwise categorize Gedge's material as it is a mix of often unusual pieces. There are some books, but also many items of ephemera, such as ledgers, official certificates, posters, schedules, letters, invitations, trade cards, even an accordion-style fan. While most items relate to England and the British Isles, there are also articles from the continent and one-time British colonies, America included. Now, here are a few samples.

Item 57 is an interesting certificate. It officially records the appointment of Mansfeldt Cardonnel as collector of the salt tax for Liverpool in 1732. The salt tax had just been imposed by Robert Walpole's government, and the people were none too happy. Walpole had chosen to reduce the property tax, which he felt unfair as it only taxed property owners, and replace it with the broader based tax on salt. Theoretically, this would be fairer as it would prevent wealthy merchants who did not own land from escaping taxation. However, the reality is that it shifted more of the tax burden from wealthy landowners to the poor who already lived under very difficult conditions. The tax led to some rioting and much displeasure, but Walpole survived the tax's unpopularity. Priced at £250 (British pounds, or about $395 in U.S. dollars).

Of course, however much the British hated taxes imposed by their government, the American colonists hated British taxes even more. Item 67 is a certificate appointing Carey Mitchell as collector of all duties for the lower James River area of Virginia in 1761. The job probably paid well, but would not have made Mitchell a popular figure in Virginia. At this time, America's relationship with its colonial power was on the cusp of making a dramatic swing. The French and Indian War, in which the British and the colonists worked together to defeat the French, was coming to an end. That close alliance would quickly turn sour as the British sought to make the colonists pay more for what they considered military protection. The certificate empowered Mitchell "to enter into any ship, bottom, boat or other vessel; as also into any shop, house, warehouse, hostelry or other place whatsoever to make diligent search into any trunk, chest, pack, case, truss or any other parcel or package whatsoever for any goods, wares or merchandise." There was no Fourth Amendment in Colonial America, and Mitchell must certainly have been despised any time he used these powers. In 1775, at the beginning of the Revolution, Mitchell was tried for disloyalty, but was discharged under parole so long as he did not assist the enemy. £1,450 (US $2,293).

Item 15 is a group of three items pertaining to fundraising by James Silk Buckingham for an expedition to the Pacific around 1830. Buckingham had published a newspaper in India and done much traveling by this time. He believed that more trade could be established with China and Japan, and noted that the Pacific islands were among the least known areas of the world to Britain. While Buckingham saw great potential there, evidently not enough others did, or did not have sufficient faith in Buckingham to achieve his goals. He never raised the money, and the voyage never took place. However, Buckingham was elected to Parliament in 1832, where he was a reformer, and did just fine for himself the remainder of his life. £1,450 (US $2,293).