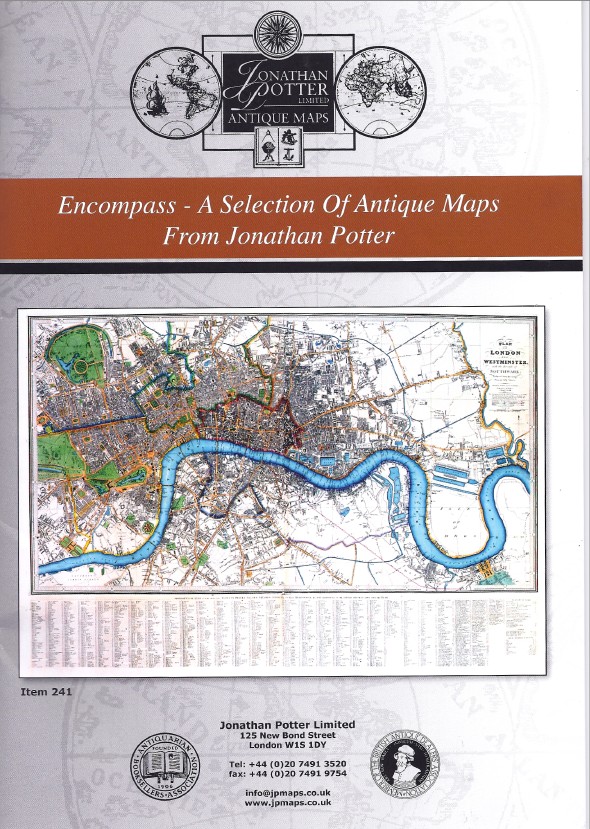 Jonathan Potter Limited has issued a new catalogue, Encompass - A Selection of Antique Maps From Jonathan Potter, dated Winter 2010 / 2011. Potter recognizes the fragility of printed presentations in the internet age, noting that despite the cost and time needed to deliver a catalogue on paper, "we remain convinced that an illustrated catalogue is the best way of maintaining contact with librarians, decorators and collectors." We too recognize that the centuries-old presentation of a catalogue on paper is for many the clearest way of displaying material, though its long-term survivability is by no means beyond question.

The maps here offered mostly range from almost two centuries to five centuries old. It is divided into regions, Europe, Asia, Africa, the New World and the British Isles. Some are of the entire world, while there is a collection of maps in the Welsh language, a very strange looking combination of letters for those used to Romance languages. Finally, there is a section of caricature maps, displaying cartoons, generally of political figures, which encompass maps. Here are a few selections from the almost 300 maps presented.

We will start with the oldest map offered, the world map from Hartmann Schedel's Nuremberg Chronicle. This book covered the history of the world, up to the present, which was 1493. Well, not quite the present, as every schoolchild knows that Columbus sailed in 1492, but there is no America on this map. This is a last look at the world as known for centuries if not millennia, the traditional Ptolemaic view. The world then consisted, to Europeans, of Europe, North Africa, and part of Asia. The Indian Ocean is shown as an enclosed sea, bounded by a landmass connecting southern Africa with East Asia. This map is taken from a Latin edition of Schedel's work. The world would soon be in for some drastic changes, displayed on the maps which follow. Item 1. Priced at £14,000 (British pounds, or approximately $22,340 U.S. dollars).

From this erroneous map we go to a "correct" one, Herman Moll's A New And Correct Map Of The World, circa 1709. Of course, "correct" is a relative term here, in times in need of correction itself. One of the most notable errors, typical of maps of the turn of the 18th century, is the depiction of California as an island. The map was supposed to have been compiled from the "newest observations," but this was a fiction no one ever observed. Item 8. £4,800 (US $7,657).

Item 45 is an interesting map for those whose interests run to technology. It's a map of Europe produced by the Electric and International Telegraph Company in 1856. There wasn't much in the way of electric service available in 1856 but there was telegraphic communications. This would be fairly early as Samuel Morse only demonstrated his invention about 15 years earlier. Nonetheless, Europe was already significantly wired by this point. This map shows the lines in place throughout Europe along with the location of telegraph stations. Insets on the main map show extended lines, all the way to Sweden and St. Petersburg. £480 (US $765).