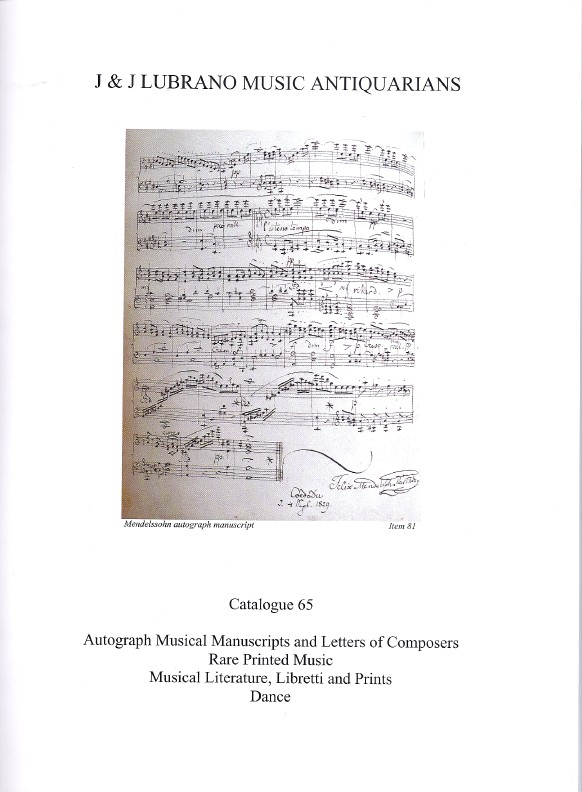 J & J Lubrano Music Antiquarians has issued Catalog 65. It is divided into four parts, Autograph Musical Manuscripts and Letters of Composers; Rare Printed Music; Musical Literature, Libretti and Prints; and Dance. This material primarily relates to what our parents called "serious" music. Nothing funny here. There is much from classical composers, or modern classicists, but there are a few out of category too, such as Dave Brubeck. Then again, isn't jazz referred to as American classical? So, here it is, 272 items that will appeal to your serious music side.

We will start with some of the human issues of one of the greatest of all classical composers. It makes us all feel a little bit taller to know the great suffered from the same concerns we do. Item 132 is an autographed letter from Tchaikovsky, from August 1893, only a few months before he died. The great musician, like the rest of us, had money problems in his later years. Here he asks Madame Laroche how she was able to get money for him, admitting that he never thought he would find himself in debt. He also notes that he would be arriving in St. Petersburg later that month and would be staying with her. Madame Laroche was the wife of critic and longtime champion of Tchaikovsky Herman Laroche. Priced at $7,200.

Aaron Copland was one of America's most noted composers of the 20th century. He was known for a diversity of music, from symphonic to film scores. Item 30 is a 1941 letter he wrote to Otto de Greiff, a Colombian professor, critic, and student of music. He thanks de Greiff for sending him some music, and promises to do his best to secure autographs of Roy Harris and Walter Piston for de Greiff's autograph collection. We don't know whether he succeeded in obtaining these, but at a minimum, de Greiff certainly obtained Copland's autograph. $275.

Item 216 is a rare 1817 Leipzig edition of Mozart's Le Nozze di Figaro (the Marriage of Figaro). Figaro, with music by Mozart and libretto by Lorenzo Da Ponte, was a comic opera first performed in 1786. It was evidently a great success almost from the first performance, and the opera's reputation and popularity has only grown over the centuries. $685.

We will take a break from writers to look at a letter from a singer. This man was the most famous, and most popular singer during the teens, and up to his death in 1921. This, of course, would be the great Caruso, tenor voice of the Metropolitan Opera. Enrico Caruso was not only a great singer, but a savvy businessman. He recognized the value of sound recordings early on, putting out many records at a time when other singers were reluctant to put their voices on the poor quality recordings of the day. He sold millions of records and made millions of dollars for his efforts. Item 24 is a letter Caruso wrote in 1905, still relatively early in his career, telling the recipient he could not send a photograph or caricature because he was in "the country," but would do so on his return. Somewhat surprisingly, Caruso was quite good at drawing caricatures of himself. $400.