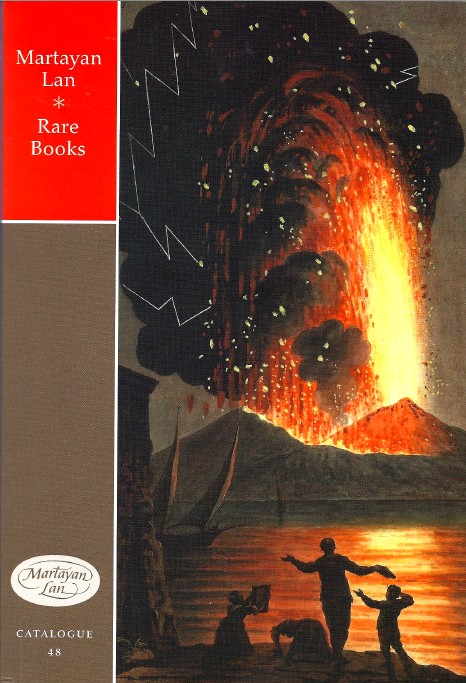 Martayan Lan of New York City has issued their Catalogue 48 of rare books in the fields of travel, science, arts and humanities. Among the subheadings offered are Americana, astronomy, mathematics, physics, technology, natural history, medicine, chemistry, mineralogy, arts and humanities. Listed additionally is an early (15th century) maritime manuscript whose whereabouts had been unknown since the 19th century. This is a catalogue primarily of books, but Martayan Lan is also well known for selling maps. Not surprisingly, many of these books, particularly in the travels section, include early maps. Here are a few samples from this collection of important, and at times exceptional, works.

Item 28 is a geography from the very dawn of the Age of Discovery, Cosmographi Geographia, from Pomponius Mela. This is the 1482 edition of Mela's ancient work first printed in 1471, but it is the first to contain the world map (and was the first non-atlas to contain a map other than the simple "T-O" map). The map shows the earliest, slight variations from the traditional Ptolemaic view of the world. Martayan Lan notes that this work was the first item in the major Americana collections of Church and Streeter, though America does not appear in this pre-Columbian work. What does show up is variations along the west coast of Africa, reflecting discoveries by the early Portuguese explorers, most notably, the eastward turn of the African coast a bit north of the equator. In the next few decades, these explorers, and others, would discover America and round the Cape of Africa, but this book represents the beginning of the Age of Discovery. Priced at $88,000.

Girolamo Benzoni was a young Italian man who traveled to the New World at the age of 22 in 1541. He visited the Caribbean, South and Central America, quite unusual at the time as the territory was controlled by Spain, and the Spanish did not generally welcome outsiders. Exactly what was his purpose is unclear, but he spent 14 years there and returned with stories to tell about the New World. Those he presents in La Historia del Mondo Nuovi, his history of the New World. It is one of the earliest accounts of the Americas, particularly by someone not Spanish. It is notably valuable for descriptions of the natives and the 19 woodcut illustrations, one of Europe's first looks at America's "Indians." Benzoni's account has its detractors. Some of his material was borrowed from Las Casas and others, and some of his descriptions of Spanish cruelty to the natives was not appreciated by Spain and its defenders. However, much of what he provides is from first-hand observations, which is generally believed to offer an accurate picture of these people while their culture was still for the most part unchanged by European intervention. Offered is the 1572 second edition, the first with all of the plates (the first edition was published in 1565). Item 3. $28,000.

Most of the world's land had been conquered by the 20th century, but not the skies. Item 79 is Some Aeronautical Experiments, an offprint of an article from the December, 1901, issue of the Journal of Western Society of Engineers. Its author was Wilbur Wright, half of the famed Wright Brothers. In it, Wright writes of testing the brothers had conducted at Kitty Hawk in the summer of 1901. At the time, they had not attempted powered flight. That would come in 1903. They were working with gliders, but what they were learning was critical to later flight - how to control aircraft, not just vertically but horizontally as well. $40,000.