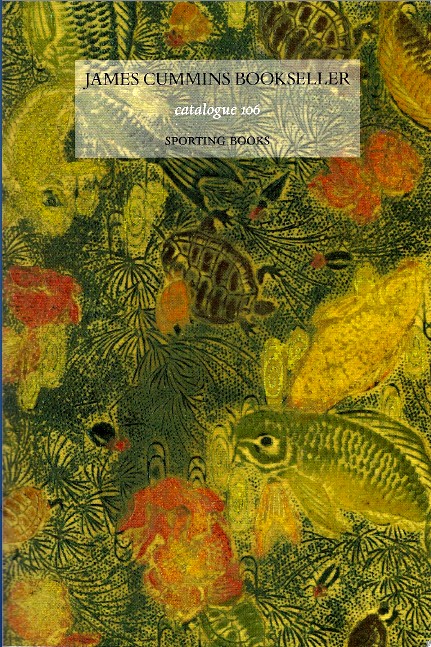 James Cummins Bookseller recently issued a catalogue of Sporting Books. There are lots of sporting books around, as attested by the over 800 items offered in this collection. Cummins has divided the catalogue into several sections: angling, hunting, Derrydale Press (a publisher of high quality mostly sporting books), and miscellaneous sports. The latter includes a few from sports with mass popularity such as baseball, basketball, golf and boxing, along with more niche events such as archery, polo, foxhunting, dueling, fencing and deer-stalking (a British form of deer hunting). Whatever your sport, Cummins probably has something for you. Here are a few examples.

Item 117 is a tale of fishing in a place far away from where most of us live: The "Fisherman" Under the Southern Cross: A Story of Adventure in New Zealand, published in 1930. Author Romer Grey is not exactly a household name, but his father was the very well known western writer Zane Grey. Zane Grey was the most popular writer of western novels, but not as well known is the fact that fishing was his other great love (along with his lady friends). He wrote several books on fishing. This was his copy of his son's book, as Romer has inscribed the copy, "To my Dad, Zane Grey, whose literary achievement has always aroused the greatest of admiration within me. I hope I shall not be a disappointment to him…" Priced at $7,500.

Item 204 is another fishing story from an unexpected source: His Fish Story. Wherein is made abundantly clear for the first Time, the proper answer to that Antient & Confusing of Questions: What makes the fish bite? The author of this "fish story" was Cotton Mather, the turn of the 18th century New England Puritan minister, most remembered, unfortunately, for his involvement in the Salem witch trials. Despite his stern religion, Mather wrote on many subjects. This piece was taken from his Magnalia Christi Americana, and republished several centuries later (1934). $250.

Dogs play an important role in hunting, whether it be for chasing down foxes or picking up birds. However, once in a while a book comes along that treats dogs a bit more seriously. Such is the case with item 688: Where is My Dog? Or, Is Man Alone Immortal? The author of this 1892 work was Charles Josiah Adams. Adams was the rector of his church, and was suffering from the loss of his dog, Tip, at the time. Adams concludes that the afterlife is not reserved for humans alone. Indeed, he finds dogs often are more deserving of eternal rewards than humans. $300.

Ever see that program on the world's worst jobs? Here's a pamphlet from a man whose profession would qualify: L.V. Powers, Castrator. Powers was a traveling castrator based in New Hampshire, and you can bet the menfolk all went into hiding whenever he came to town. In this publication, he notes that he is about to start his annual trip, pointing out that he performed 250 castrations in 1891, 300 in 1892, and over 300 in 1893. It must have been a real conversation stopper at parties when people asked Mr. Powers what he did for a living. Incidentally, he performed his magic on horses. The horse-folk all went into hiding when he paid a visit to their town. Item 780. $350.