Science and its Development from B & L Rootenberg Rare Books 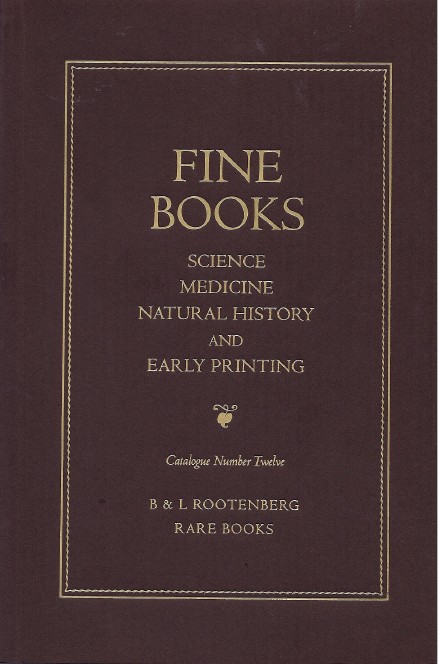 Science and its Development from B & L Rootenberg Rare Books

B & L Rootenberg Rare Books has published their 12th catalogue, Fine Books. Science, Medicine, Natural History, and Early Printing. This is not a catalogue to find fiction, at least not intentional fiction. Time may have turned much of what people once believed from fact to fantasy, but these works represent man (and woman's) search for knowledge in a time when so much of what everyone knows today was still a mystery. These are the books that led us from darkness to light, the steps that made today's understanding of the world possible. These books are us.

Anyone who has ever watched a train whiz by is familiar with the Doppler effect. However, Doppler's discovery has been used for far more than simply telling when a train has passed you. The shift in the frequency of sound waves also applies to radio and light rays, enabling the effect to be used to determine the movement of stars, the rotation of the sun, and more recently such things as weather radar. Item 35 is a May 1842 publication containing Johan Doppler's paper explaining his discovery, Ueber das farbige licht der doppelsterne und einiger anderer Gestirne des himmels. Priced at $16,500.

Christian Huygens was one of the leading scientists of the 17th century. He studied the cosmos, developed the pendulum clock, enunciated the wave theory of light, and much more. Item 63 is a more speculative though fascinating work of Huygens, the 1698 first edition in English of The celestial worlds discover'd: or, conjectures concerning the inhabitants, plants and productions of the worlds in the planets. Huygens believed that in the Copernican world, where the earth was no longer believed to be the center of the universe, there was no reason to believe life on earth should be something special. Therefore, he reasoned, there must be similar life on the other planets. Of course we now realize this is not true - that drastically different climates mean there is no life remotely similar to our own on our solar system's other planets. However, we are now starting to discover planets circling other stars whose position in their solar systems could mean a similar climate, and so once again we are wondering whether Huygens' logic may yet hold. $16,000.

The most popular book enunciating a theory of evolution in the 19th century was not written by Charles Darwin. It was, instead, a book published in 1844, 15 years ahead of Darwin, titled Vestiges of the natural history of creation. It was published anonymously, as well might a book bound to generate controversy. Its author was the publisher, phrenologist and geologist Robert Chambers. Chambers had viewed the fossil history and concluded that God had not made the world's creatures exactly as they are today. He realized that species had come and gone, and changed along the way. Chambers did not come up with the right mechanism, natural selection, which is why his contribution has faded while Darwin remains influential (and controversial) to this day. He believed that God had created natural laws, and it was through those laws that species changed, rather than through some type of personal Divine intervention. As it turned out, Darwin had developed his own theory of evolution at the same time, but fearing controversy, decided to sit on it while building an airtight case, while Chambers was willing to write (anonymously) on his theories without first gathering all of the details. Item 27 is a copy of the first edition of Vestiges along with a first edition of Chambers 1845 follow-up Explanations: A sequel to "Vestigies of the natural history of creation," which answered some of the objections to his work. $6,500.