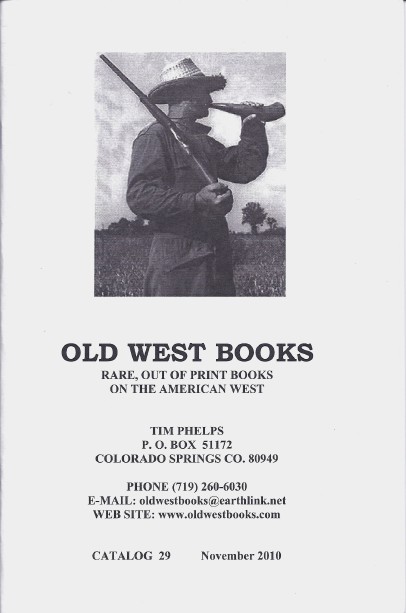 Old West Books has issued Catalog 29 of books about just what you'd expect. It offers a nice mix of contemporary, highly collectible books with more recent histories and reprints suitable for reading. Among the topics covered are Custer, cattle, the fur trade, outlaws, Indian wars, lawmen, and the Texas Rangers (not the baseball team, the lawmen). You may find some exaggeration here, authors tending to make bigger-than-life characters even bigger than bigger than life, but there is no limit to the wonder and excitement to be found in these books. It's time to go back to the days when the West was still wild, the frontier still a place of discovery and danger, where only the hardiest could hope to survive.

You expect most books about the West to be focused on someone shooting someone, and there is some of that here, but this book covers much more about the area that houses America's first national park: Chronicles of the Yellowstone. An Accurate, Comprehensive History of the Country Drained by the Yellowstone River… Author E.S. Topping reviews its history (as of 1883), including records of its Indian inhabitants, the geysers and other natural wonders in the park, the trappers, gold seekers, settlers and soldiers who came, the railroad, the Indians wars and building of towns. This is a rare book about what may be the West's most spectacular region. Item 16. Priced at $1,000.

The Indians got a lot of bad press in the 19th century. Those who took their homeland from them reacted with dismay and horror when the natives fought back. One of the few who recognized that the natives were being terribly mistreated was John Beeson, an immigrant to Oregon from Illinois. He was compelled to speak out, which he did in A Plea for the Indians; with Facts and Features of the Late War in Oregon. Offered is an 1858 third edition of a work originally published in 1857. Beeson did not win plaudits from his neighbors for pointing out the injustices. Instead, he had to flee the territory for his life. His book did receive a much warmer reception back east where sympathy for America's natives was greater. Item 32. $575.

Now here is a tale of the Old West at its wildest. Actually, this is more of a horror story than a western. The Benders, aka the "Bloody Benders," opened an isolated inn along a roadway in Kansas in 1871. It was a combination small store and inn where travelers could spend a night… or eternity if they weren't careful. The Benders consisted of a man and wife in their 50s and a son and daughter. Most weren't terribly social except for daughter Kate, reputedly a very attractive, talkative, and charming young lady who could lure any traveling male in for the night. Guests would be seated with their backs to a curtain, wherefrom father or son would emerge with a hammer, smash in the guest's skull, and after slitting their throats to be certain they were dead, the bodies would be dumped down a trap door to the basement. This place was a combination Bates Motel and Sweeney Todd's barbershop. After a few too many people disappeared along the road, folks from nearby towns began searching the homesteads along the way. Something around a dozen bodies were found buried in the orchard behind the Benders' inn, but by then, the family had fled. They were never found. It was learned that they weren't really a family, only Kate and her mother actually being mother and daughter. Several vigilante parties claim to have killed them, but that seems to be boasting. A railroad engineer's testimony indicated they had taken a train from a nearby town, and later split up, two heading to west Texas, two to St. Louis. In 1889, two women were brought from Detroit to Kansas, supposedly the "Bender" women, but were released for lack of evidence. Whatever happened to the "family" remains a mystery to this day.