FLORIDA from King and Queen Books 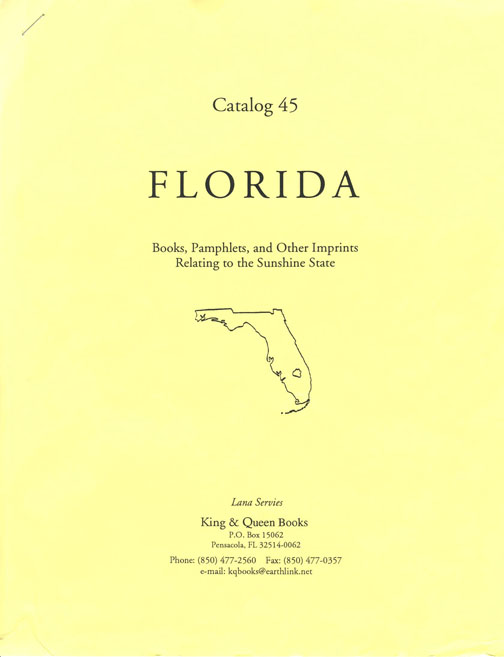 FLORIDA from King and Queen Books

King and Queen Books is a bookseller specializing in works from or about their home state of Florida. Many people think of Florida strictly in terms of winter beach resorts, orange trees, and theme parks, but there is much more. King and Queen is actually located far from what most people think of as Florida, in Pensacola, almost 700 miles from Miami, in that area variously known as the "Panhandle," "West Florida," or "South Alabama." We are looking at their "Catalog 45, FLORIDA - Books, Pamphlets, and Other Imprints Relating to the Sunshine State." It will be of interest to anyone who collects Florida, lives there, or has any other connections to the Sunshine aka Hurricane State.

Here are a few examples of what you can find in this catalogue. Item 56 is The East Florida Annual, 1915, 1916. This is a very rare book, with descriptions and statistics for east and south Florida counties and papers on agriculture and the Everglades. King and Queen say that they have only been able to locate one other copy, and despite a note proclaiming a forthcoming 1916-1917 edition, they have not located any other editions. Priced at $250.

Florida exhibited at the 1934 World's Fair in Chicago, and if you had visited their exhibit, you could have picked up the Official Directory of the Florida Exhibit, World's Fair, Chicago. 1934. This pamphlet was designed to tell strangers about the state, with special emphasis on the community which produced it, Plant City ("America's winter strawberry capitol"). Item 165. $55.

Item 120 is a notable title for those interested in Florida's highways, Florida Trails to Turnpikes, 1914-1964, by Baynard Kendrick. The book was published to celebrate the 50th anniversary of the Florida State Road Board. This copy is inscribed by the author. $35.

Item 10 is an old schoolbook, The Americas, by Wallace Atwood and Helen Thomas. Published in 1929, this is a copy of the Florida edition of the text, and is marked with a state ownership stamp. $18.

Here's a tourist item for St. Petersburg. Published by the "Tourist News Publishing Co." in 1924, it is called Seeing St. Petersburg, a Book of Information for Visitors. The city won't look much like it did in this book anymore, but area residents may find the comparison interesting. Item 182. $60.

Curt Engelbrecht wrote a book about his neighbor called Neighbor John. Intimate Glimpses of John D. Rockefeller. Engelbrecht must have lived in a very nice neighborhood. Actually, he was Rockefeller's personal press photographer and tells us something about the man. Originally published in 1936, this is a 1978 edition. Item 58. $15.