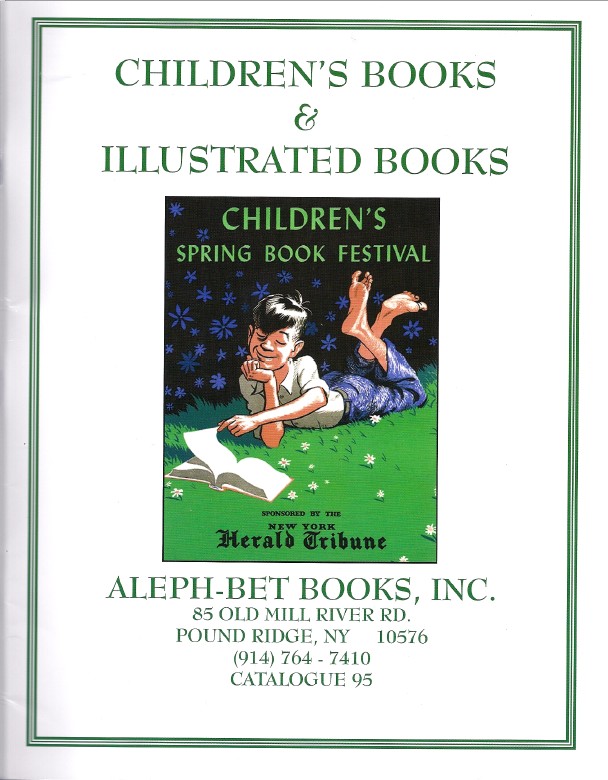 Aleph-Bet Books has released Catalogue 95 of Children's Books and Illustrated Books. The overwhelming majority of the 600 items offered are described by both of the adjectives above. There may be an occasional item not targeted to the young ones, and some early children's items wanting for illustrations, but generally, kids and pictures go together. Certainly, they go together in the many fine works found in this catalogue. A few may not be so nice, such as propaganda for the Nazis, or works that displayed the prejudices all too vividly of the older generation that produced them. Nevertheless, most of what we find is great fun, often clever and humorous, and will take you back to the days when you, too, were very young.

Item 267 is described by Aleph-Bet as "perhaps the rarest" book from Johnny Gruelle. The author is Rose String Hubbell, Gruelle having provided the illustrations for Quacky Doodles and Danny Daddles Book. It is a story about a duck and a teddy bear and their friends. If Gruelle's artistic style in the 1916 book appears somewhat familiar, it is because he would begin publishing books two years later featuring his most famous creation, Raggedy Ann. Priced at $1,850.

Item 595 is one of those pieces of World War II propaganda aimed at children, though at least not one of the uglier ones. Instead, it is a very positive piece, entitled Pourquoi Aimez-vous le Marechal Petain? (Why do you like Marshal Petain?). Marshal Petain headed France's collaborationist Vichy regime during the war after France was overrun by the Germans. This circa 1942 bit of propaganda asked various French children why they liked the collaborationist (it, naturally, does not describe him as such) Petain. The book includes a picture of each child along with his or her answer. After the war, Petain was tried, convicted of treason, and sentenced to death, a punishment converted to life in prison because of his advanced age and one-time national hero status for his actions in the First World War. $500.

Marketing empty calorie foods to children is hardly something new, though it seems to have become more effective in recent years. Item 12 is the Alphabet Book of Coca Cola, published in 1928. Each verse promotes the consumption of the popular soft drink, with color illustrations reinforcing the message. "B is for Bottle, Baseball and Bat! Without Coca-Cola the game would fall flat." "B" is also for beer, as any baseball fan could tell you. $875.

Children's story characters have been enlisted in the fight for many good causes over the years. Here is such a cause - sitting erect in your seat. This circa 1925 poster employs Frank Baum's Scarecrow and Patchwork Girl to "Sit Erect. Like the Universal Girl." Universal girl is shown sitting in her combo desk and chair, one of those horribly uncomfortable contraptions people as old as I had to sit in for hours on end in school. The rhyme tells children to "Sit straight in your chair. / Be happy. / Live long. Hollow chests come from "slumping." / Slumpers seldom are strong." Presumably, six hours a day of this torture enabled "universal girl" to be strong, live long, and have a full chest. Item 91. $850.