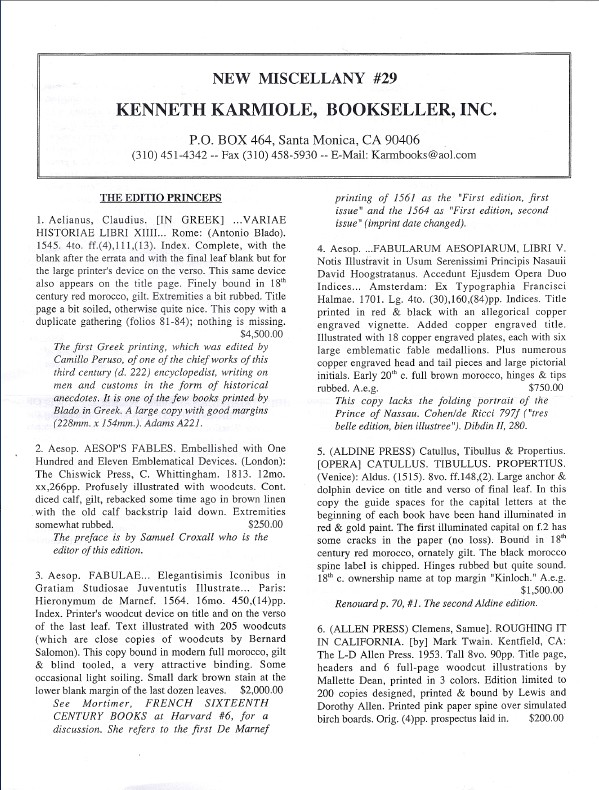 Kenneth Karmiole, Bookseller, has issued a New Miscellany #29. For those who don't like seeing too much of the same thing, Karmiole's catalogues are perfect. They are impossible to classify by subject. You may, and probably will, find just about anything in these catalogues. There are items from the 15th through the 20th century, languages from old Latin to modern English, and a variety of topics too numerous to mention. Here are a few of these varied items.

Item 10 is one of those critical pieces for a collection of Texiana. It is Mary Austin Holley's Texas. Mrs. Holley was a cousin of Stephen F. Austin, the founder of the first Anglo colony in Texas, often referred to as the "Father of Texas." The first edition had been published in 1833, when Texas was still a Mexican state. The author's purpose was to promote settlement by Americans. Here offered is a second edition from 1836. This edition, which was expanded to include a history of Texas, was still intended to encourage settlement, but under very different circumstances. The Texas Revolution intervened between editions, and by this point, Texas was now an independent republic. This copy is lacking the map. Priced at $1,250.

Of course, Texas isn't the only place with an interesting history. Item 30 is A Complete History of England...from the Descent of Julius Caesar, to...1748, by Tobias Smollett. That's a long time (Smollett tells us 1,803 years), requiring four volumes to recount. This is a first edition from 1757-58, and it runs from the not so well known Roman period in England to what was almost the present two and one-half centuries ago. $1,000.

Here is a work by a man who lived in the middle of that long English history. Item 48 is Summa de Regimine Vitae Humanae, by Johannes Gallensis, or John of Wales. This is an incunable, the last 15th century edition of Gallensis' collected works, published in 1496. John was a Franciscan Friar who lived several centuries earlier, writing his works in the mid-13th century. His topics, not surprisingly, are geared toward men of the Church, providing them with moral guidance. $4,000.

Item 65 is an early printing of one of America's most important documents. It is General Order No. 1... A Proclamation... All Persons Held as Slaves Within Any State...in Rebellion Against the United States, Shall Be Then, Thenceforth, and Forever Free. This proclamation is, of course, better known as the Emancipation Proclamation. It was issued from the War Department's Office in early January of 1863. This was the final, official text of the order that freed the slaves, now known to be the fifth printing of the proclamation, all within a few days of issuance. $2,500.

Item 52 is the first English edition of what may be the first psychological, maybe even the first modern novel published, The Princess of Cleves. Originally published in French in 1678, the English edition was printed the following year. It is a tale of a woman of noble, though not high noble background, who marries an acceptable, though not a particularly accomplished man, the Prince of Cleves. However, she later falls in love with another, the suave Duc de Nemours, and eventually admits to her affair to her husband. Her husband becomes ill, and on his deathbed, begs his wife not to marry the Duke when he is gone. Duty wins out in the end, as the Princess does not marry her love interest, and their relationship fades away. The book was published anonymously, but it has been determined that the author was Madame de La Fayette, who wrote several anonymous works and was friendly with many of the notable writers of her time. $3,000.