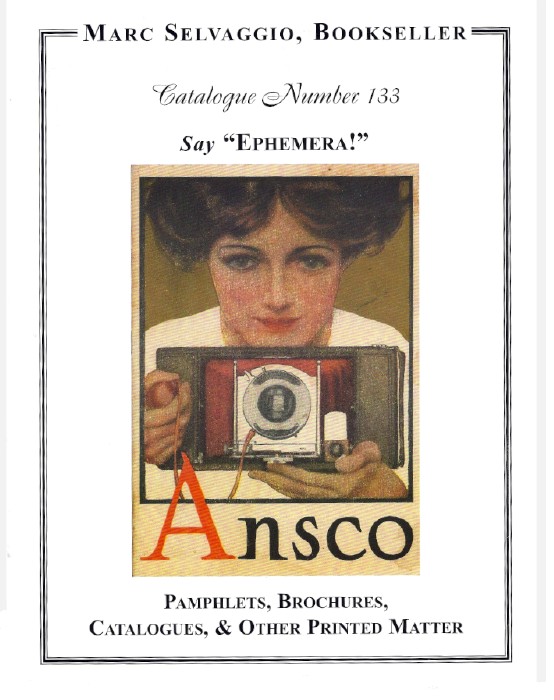 Marc Selvaggio, Bookseller, has issued a new catalogue, Say "Ephemera!" This is Selvaggio's fourth ephemera catalogue, and it is filled with material that is uncommon, unusual, and often most entertaining. Ephemera is a great place to collect if you want to possess material that is rare yet priced as if it were common. These old flyers, pamphlets, advertising circulars, trade catalogues and the like are inexpensive, though rarer than the typical "collectible" first edition that can cost thousands if not tens of thousands of dollars. This is a great place to start collecting, or build a collection on a workingman's budget. Here are some suggestions to start.

Give Ferdinand Borges credit for creative thinking. He developed a Ponzi scheme before Charles Ponzi did. Item 117 is a 1902 promotion for his Consolidated Ubero Plantations, The Rubber of Commerce. A Treatise for Investors. Ubero was going to produce rubber on its Central American plantations, along with pineapples, coffee, and other items. Borges did own some land, but it was not producing any of the promised goods. What it was producing was money - for Borges. The money he took in for selling bonds went to his sales agents and himself, rather than to the plantations. All told, Borges took in $2 million when that was a lot of money before being caught and convicted of fraud and larceny. Priced at $165.

Item 35 is a promotion for one of the greatest cars, or whatever, ever devised: Amphicar - The Sportscar That Swims. This may not be what we normally think of as a sports car, if features such as speed, power, and sleek looks are common attributes of such designation. Nevertheless, this was the only car ever devised that functioned as a boat too. You could literally drive this thing into a lake and start driving it around in the water. Ultimately, it wasn't a very good car or boat, and so the Amphicar Corporation folded in 1965, after just five years in production, but these rare marvels have loyal followers today. With so many stories of cars being swept away in floods, having one of these might not be such a bad idea. $35.

The Huppmobile had a longer run than the Amphicar, but its fate was ultimately the same. It was introduced by company founder Robert Craig Hupp in 1909. Hupp moved on, but the company prospered for two of its three decades of life. Expansion was great during the teens and much of the 20s, but Huppmobile had some trouble deciding where to fit in, and then with the Depression, sales tumbled. The company held on through the 30s, finally throwing in the towel in 1940. Offered is a brochure from its early days, circa 1910, where the company proclaimed, "...we believe the Hupmobile to be, in its class, the best car in the world." Item 135. $200.

Item 296 is a 1915 publication from the Angier Chemical Co.: A Study of the Therapeutics of Petroleum Oil. Angier's emulsion, made from petroleum, "acts like mucus," always a selling point. It cured TB, bronchitis, GI problems, and "wasting diseases of children." So remember, those oil-coated birds and turtles you see in the Gulf are actually healthy animals. $45.